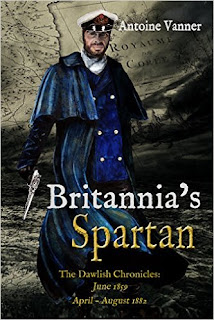 An honorable mention in the MARHST-L listing of important maritime books and favorite maritime authors was Antoine Vanner's Dawlish series.  Extremely well-written, and staged in an unusual naval setting, and starring a flawed and memorable character, these books are highly recommended.

The fourth volume of the Dawlish Chronicles has just arrived on the scene, and may be the best of a fine lot.

It is 1882 and Captain Nicholas Dawlish has just taken command of the Royal Navy’s newest cruiser, HMS Leonidas. Her voyage to the Far East is to be a peaceful venture, a test of this innovative vessel’s engines and boilers. It should bear no relation to the nightmare of failure in China that Dawlish remembers as his baptism of fire as a boy.

As HMS Leonidas arrives in Hong Kong Dawlish has no forewarning of the nightmare of riot, treachery, massacre and battle that he and his crew will encounter.

A new balance of power is emerging in the Far East. Imperial China, weak and corrupt, is challenged by a rapidly modernizing Japan, while Russia threatens both from the north. They all need to control Korea, a kingdom frozen in time and reluctant to emerge from centuries of isolation. British interests too are at stake, and treading a safe path between the rival powers is vital, but perhaps impossible.

Dawlish finds himself a critical player in a complex political powder keg. He must take account of a weak Korean king and his shrewd queen, of murderous palace intrigue, of a power-broker who seems more American than Chinese and a Japanese naval captain whom he will come to despise and admire in equal measure. And he will have no one to turn to for guidance.

Britannia’s Spartan sees Dawlish drawn into his fiercest battles yet on sea and land. Daring and initiative have already brought him rapid advancement and he hungers for more. But is he at last out of his depth?

Earlier volumes in the series - Britannia's Wolf, Britannia's Reach and Britannia's Shark - have charted Dawlish's rise in the Royal Navy. As a boy in the late 1850s he has joined a navy still commanded by veterans of the Napoleonic Wars. But now, in the early 1880s sail is yielding to steam, new technologies are creating new weapons and old international power-balances are shifting. Against the background of real historical events Dawlish has to confront challenges inconceivable to earlier generations of officers. It won't be easy...

Posted by World of the Written Word at 3:45 PM
Email ThisBlogThis!Share to TwitterShare to FacebookShare to Pinterest