Preserved food for seamen and soldiers

During the Revolutionary and Napoleonic wars which raged across Europe in the late 18th and early 19th centuries a high priority for the French military commanders was to keep their troops properly fed whilst on the march. Soldiers could live off the land in the summer but struggled to find energy giving foods during the long winter months. The Emperor Napoleon Bonaparte, commanding his vast armies, realised the need to transport nourishing convenience rations for his troops over long distances. He offered a prize of 12,000 Francs to any person who could provide the solution. Nicholas Appert, a confectioner by trade, carried out experiments for some eleven years with the preservation of meat and vegetables in stoppered jars which had been immersed in boiling water. He submitted his concept to the French government and was awarded the Emperor’s prize in 1809. It is uncertain how successful his innovation proved to be as the glass jars were heavy and liable to breakage when transported over rough roads.

Appert published a book detailing his methods in 1810 and Peter Durand, an English inventor, obtained a copy. He patented a tinplate can design which offered a stronger alternative to glass. Brian Donkin, owner of the Dartford Iron Works, bought Durand’s patent and began food canning experiments in a factory in Bermondsey. Donkin saw the British Navy as the main outlet for his preserved foods. The Navy Board managed a fleet of a thousand ships across the globe and keeping the crews economically and healthily fed was a demanding task. 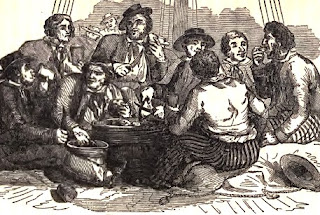 Donkin’s company offered Appert’s recipe for boeuf boulli, which the sailors anglicised to bully beef, and various fruits and vegetables and even milk.  Early cans had a body made from tinplate with a locked internally soldered side seam. A stamped and flanged end was soldered to the bottom. The contents were hot filled and the ‘customer end’ was then thickly soldered to the top of the can body. This end had a handle and hole through which gravy or juice was poured to fill the headspace. A cap with a small vent hole was then soldered over the hole. When steam came from the vent hole during processing it was sealed with a drop of solder. The whole can was then placed in a heated bath for the “required time”. Can sizes ranged from 4 to 45lbs and it is said that a whole sheep was processed on one occasion. A skilled tinsmith could make up to 10 cans a day. (Today’s DWI line makes 1750 baked bean cans a minute!)

With slow production speeds the opportunity for volume sales to large organisations such as the Navy was limited. Added to which with the ending of the war with France in 1815 the Navy was left with large stocks of salted meat and was not anxious to purchase the expensive new canned alternatives. Initially it bought canned meat and soup on the recommendation of the Admiralty’s doctors for sick and convalescent seamen. By 1827 the Navy Board had laid down scales of preserved foods to be issued generally in place of salted provisions.

Donkin’s company shipped canned goods all over the world in the early 1800’s as they gained popularity. A captain of an English ship visiting Brazil in 1821 amazed his dinner party guests on board with the menu he provided. He noted in his diary “Tinned meats were in their infancy. I astonished them with a six pound piece of salmon to begin with and then a fillet of veal. A friend had sent me two hampers of good things from Fortnum and Mason’s and these tins were part of the lot”. 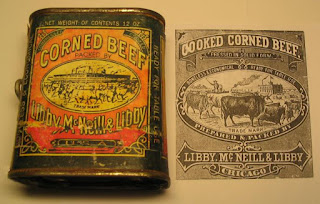 The merits and convenience of canned food were appreciated by the leaders of voyages of exploration. Edward Parry on his arctic expedition in 1819 to find the North West passage took tins of roasted veal, each tin having the instructions “to open cut round the outer edge with chisel and hammer”. Parry failed to find a passage through the ice and in 1845 John Franklin led another expedition to the arctic as part of the global magnetic survey, once more equipped with a selection of tinned goods. Nothing more was then heard of his two vessels and amazingly thirty nine expeditions were sent to find the lost men. In 1859 a stone cairn was discovered containing a log book of Franklin’s voyage which showed that, after his ships had become frozen in the ice for eighteen months, he and his men trekked southwards but all had perished on the way. Although a  20th century analysis of some of the explorers’ bones found by the cairn showed some signs of lead poisoning, presumably from the canned food they had eaten, it is certain that starvation and scurvy was the cause of  death of most of the expedition members. 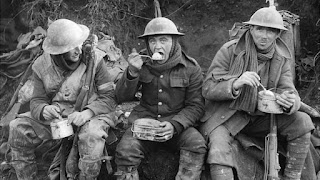 From these early business ventures triggered by the demands of an Emperor for a method to preserve food to feed his army grew a safe world wide canning industry which has contributed to the health and living standards of millions of people.

Many thanks to Malcolm Lewis, who himself thanks John Rees ex-R&D Wantage for the technical information.
Posted by World of the Written Word at 8:50 AM
Email ThisBlogThis!Share to TwitterShare to FacebookShare to Pinterest