Save the Channel hovercraft! 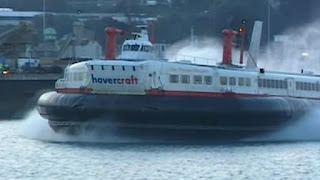 Hoverspeed hovercraft set to be destroyed

Two famous hovercraft are set to be destroyed in Hampshire.

The Princess Margaret and Princess Anne Hoverspeed vessels carried passengers between Dover and France for 30 years.

They were taken out of service in 2000 and have since been stored at Lee-on-Solent.

Contractors aiming to develop the land to create new homes now plan to demolish them.

The nearby Hovercraft Museum hopes to save one of them for the nation.


Museum volunteers who fear the last remaining cross-Channel hovercraft are on the verge of being destroyed have started a petition to save them.

The Princess Margaret and Princess Anne Hoverspeed vessels are stored at the Hovercraft Museum at Lee-on-Solent.

The museum said the site's owner, the government's Homes and Communities Agency (HCA), wants to develop the land to create new homes.

More than 2,600 people have signed the petition to date.

According to the museum, the craft - which are the last remaining cross-Channel SRN4 hovercraft - are now in the possession of HCA.

The vessels are not owned by the Hovercraft Museum Trust.

The museum's trustees said they hoped a deal could be reached with HCA and have submitted a proposal to save the Princess Anne, which is in better condition than the Princess Margaret.

However, they said they had "reluctantly accepted" the Princess Margaret was likely to be broken up and sold for scrap.

Hovercraft Museum trustee Emma Pullen said: "Many people come simply to see these huge relics from a bygone age and their loss would be an enormous blow to the museum.

"They are piece of British history, the like of which we will never see again.

"We will do everything in our powers to protect at least one of these national treasures."

The cross-Channel service from Dover to Calais closed in 2000.

They were built on the Isle of Wight by the British Hovercraft Corporation in the 1970s and operated from Dover and Pegwell Bay in Kent.

They were replaced in 2000 by a catamaran service.


Posted by World of the Written Word at 8:31 AM
Email ThisBlogThis!Share to TwitterShare to FacebookShare to Pinterest