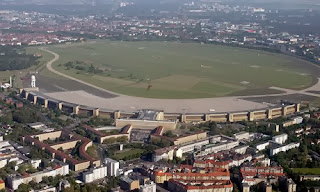 One of Europe's first city airports, Tempelhof, made history when western allies used it to break the Soviet blockade of West Berlin in 1948. But since its closure in 2008, politicians in the German capital have been unsure what to do with it.

Now the site is set to be transformed from a historic monument to a hub of historic learning: on Wednesday the city senate unveiled two possible designs for a new central library adjacent to the airport's disused landing strip.

If either of the designs is realised, the building will be intended to become a rival to Paris's Pompidou Centre: an architectural "statement building" with 3,200 seats for readers, galleries, event spaces, restaurants and a children's library. The iconic airport will be reborn as a vibrant focal point for the city's notoriously scattered cultural life.

The proposed cultural centre already has high expectations to meet. Berlin's existing central libraries draw 5,000 visitors a day, but culture senator André Schmitz predicts that the new building will attract twice as many – approximately 3.5 million a year, roughly equal to the numbers at the Pompidou Centre, which hosts a viewing platform for tourists in the heart of the French capital.

The British Library at St Pancras, London, which, unlike Berlin's, requires membership but serves as a legal deposit library for the entire country, receives around 4,000 visitors a day.
Posted by World of the Written Word at 11:28 AM
Email ThisBlogThis!Share to TwitterShare to FacebookShare to Pinterest