Scared of the scary hoi polloi, the super rich are building bunkers... 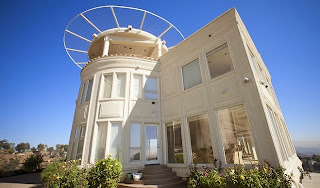 ... maybe because their progeny are reading the Hunger Games series.


The mega-rich are building houses with security that far eclipses anything seen in The Purge. Including a 2,500-square-foot ballistics-proof house inside the main house, called the "safe core." And a helipad on the roof. And infrared detection of anyone approaching, up to 15 km away. Dystopia now!
Top image: WSJ
Forbes has a pretty hilarious rundown of the insane security features deployed by people whose wealth and paranoia are both limitless. Along with a profile of Al Corbi, whose house that is in the above picture, from a previous Wall Street Journal profile. Some hilarious quotes from the Forbes piece, which is getting picked up everywhere:

[The Corbi family] sleeps easily inside a 2,500-square-foot home within a home: a ballistics-proof panic suite that Corbi refers to as a "safe core."

[Infrared cameras] can pick someone out even from a hiding place, from a kilometer away in the lowest-end models to as much as 15 kilometers away in the premium versions.

And don't forget the smoke. The Corbis have a system that billows out fog screens that range from a harmless smoke meant to disorient intruders to a noisome gas with disabling effects lasting up to 24 hours.

Gilbert, Ariz.-based Creative Home Engineering specializes in a different kind of portal: secret passageways. Started by an ex-Boeing engineer, the company custom-crafts clandestine entrances that double as bookcases or wardrobes or walls.

Also, according to the WSJ piece, "dirty bomb" shelters with their own air purifiers are becoming way more popular, as are secret escape tunnels that lead outside. In general, the market for ludicrously expensive security measures — the word "bunker" comes up a lot — has grown massively in the last five years. 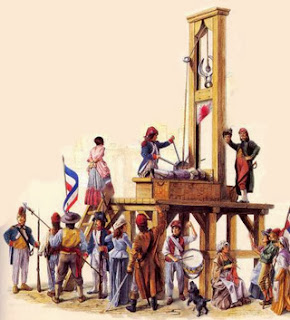 BRING BACK THE GUILLOTINE!
Or so roar the commentators.
"Why does this all remind me of the France in Tale of Two Cities?" asks one.
"The aristos try to wall themselves away from the rest of us and the dirty, smelly world in their panic rooms, bullet proof limousines and their gated communities but if a revolution comes, it will all be for naught. Paranoia and fear only generates more paranoia and fear in the people you fear."

Others, very sensibly, point out that the most heavily defended bunker can be betrayed from within.  "Pay your servants well," one advises.

After all, even Bin Laden's fortress failed.

READ MORE
Posted by World of the Written Word at 11:03 AM
Email ThisBlogThis!Share to TwitterShare to FacebookShare to Pinterest

We hope there is no connection between this story and the extensive work being carried out on your own home!

Just an update, spouse (who used to be a lawyer but is feeling MUCH better now) says that most of these things are against the law. One dopey burglar sets off the poisonous fogs and these folks are going to find their fortresses are liability and insurance-rate-hike traps. LOL

Ha! There's a thought. Right now, we are depending on our builder's dog.