Stag party stunt gets out of hand 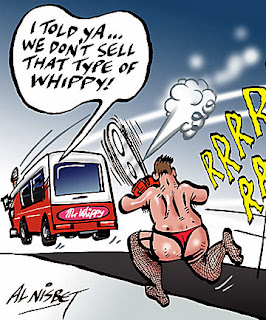 Every now and then a news item crops up that absolutely begs to be featured -- with an equally irresistible cartoon.

A chainsaw-wielding man wearing fishnet stockings chased a Mr Whippy van down the street after a stag party got out of hand.

Police Sergeant Colin Stewart said the man, who is in his 20s, had reportedly emerged from a Rangiora property, revved the chainsaw into life and held it above his head as the ice-cream van went by.

"He was shaking it and waving it," he said.

Mr Whippy "wasn't travelling at great speed - probably within the 4kmh limit" so the man made chase along the footpath - still holding the running chainsaw.

He abandoned the chainsaw before leaping into the van's passenger seat.

Stewart said the man was polite. He said hello to the driver before alighting.

Police were provided with a description of the offender, namely a man wearing black fishnet stockings.

"It made him reasonably easy to identify," Stewart said.

When officers made inquiries at the property, the man "put his hand up to it".

"He was apologetic. It was more a disorderly behaviour thing than a direct threat [to the driver]."

Stewart said the offence was alcohol-fuelled at the end of an unusually hot day.

Posted by World of the Written Word at 9:15 AM
Email ThisBlogThis!Share to TwitterShare to FacebookShare to Pinterest