From GalleyCat at Mediabistro.com 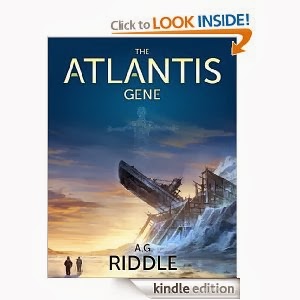 Amazon Self-Published Bestsellers for the Week of December 10, 2013

1. The Atlantis Gene: A Thriller (The Origin Mystery, Book 1) by A.G. Riddle: “The Immari are good at keeping secrets. For 2,000 years, they’ve hidden the truth about human evolution. They’ve also searched for an ancient enemy–a threat that could wipe out the human race. Now the search is over. Off the coast of Antarctica, a research vessel discovers a mysterious structure buried deep in an iceberg. It has been there for thousands of years, and something is guarding it. As the Immari rush to execute their plan, a brilliant geneticist makes a discovery that could change everything.”

2. The Midwife’s Revolt by Jody Daynard: “The Midwife’s Revolt takes the reader on a journey to the founding days of America. It follows one woman’s path, Lizzie Boylston, from her grieving days of widowhood after Bunker Hill, to her deepening friendship with Abigail Adams and midwifery, and finally to her dangerous work as a spy for the Cause. A novel rich in historical detail, The Midwife’s Revolt opens a window onto the real lives of colonial women.”

3. Married by Christmas by Scarlett Bailey: “Anna Carter is on the brink of her dream Christmas wedding, she’s got the dress sorted, the church books, even the reindeer to pull her in a sleigh to the ceremony. But now – only two weeks before her big day – her perfect husband-to-be drops a bombshell… Only nothing’s going to stop Anna’s plans – not even the pesky inconvenience of discovering her groom already has a wife!”


5. Snowbound by Blake Crouch: “For Will Innis and his daughter, Devlin, the loss was catastrophic. Every day for the past five years, they wonder where she is, if she is—Will’s wife, Devlin’s mother—because Rachael Innis vanished one night during an electrical storm on a lonely desert highway, and suspected of her death, Will took his daughter and fled.”

6. The Atlantis Plague by A.G. Riddle: “In Marbella, Spain, Dr. Kate Warner awakens to a horrifying reality: the human race stands on the brink of extinction. A pandemic unlike any before it has swept the globe. Nearly a billion people are dead–and those the Atlantis Plague doesn’t kill, it transforms at the genetic level. A few rapidly evolve. The remainder devolve. As the world slips into chaos, radical solutions emerge. Industrialized nations offer a miracle drug, Orchid, which they mass produce and distribute to refugee camps around the world. But Orchid is merely a way to buy time. It treats the symptoms of the plague but never actually cures the disease.”

7.  Broken by Kelly Elliott: “Layton Morris and his brother Mike grew up not knowing what it would be like to live in a normal home. With no running water or electricity in their home, no parents around to protect them, they quickly learned how to survive and depend only on each other. When a tragic accident takes Mike away from Layton, and the only other person that he ever let into his heart walked away from him, leaving his heart shattered, Layton focuses all of his time and energy into the ranch he and his brother dreamed of.”

8. Lovable Christmas Angel: Book #3 – Romance and Heavenly Spirits by Mimi Barbour: “Christmas in Hawaii! How lucky can a girl get? Except Leilani is bringing her mother’s ashes home to Waikiki and has an urgent plea of help from an aunt she’s never even met. After winning two free nights in prestigious Hotel Jordan, things take a turn she never expected. First she gets stuck in an elevator with the prickly, but luscious Mr. Jordan. Secondly, her aunt is a sick woman and only held on for one reason. She wants to pass on her most precious possession – her five-year-old grandchild. The same little fellow that takes one look at Leilani, slaps his fist on his hips and yells, ‘Go away!’”

9. Until You (Fall Away Series) by Penelope Douglas: “Have you ever been so angry that hitting things felt good? Or so numb that you actually felt high? The past few years have been like that for me. Traveling between fury and indifference with no stops in between. Some people hate me for it, while others are scared of me. But none of them can hurt me, because I don’t care about anything or anyone. Except Tatum.”

10. Stinger (Sign of Love, Scorpio) by Mia Sheridan: “Grace Hamilton was the girl with a plan. She knew exactly where her life was going and prided herself on always achieving her goals. It was who she was, and how she lived her life. She never stepped outside the lines, and never considered what she might desire and whom she was actually trying so hard to please. Until him…”
Posted by World of the Written Word at 11:33 AM
Email ThisBlogThis!Share to TwitterShare to FacebookShare to Pinterest