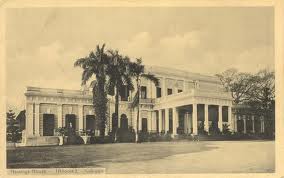 Fascinated by the story of the hidden chamber that has been located in Belvedere House, the National Library of India, I have been impatiently awaiting news from the Archaeological Survey of India, which is cautiously opening a peephole.

The mystery of what is hidden inside the chamber -- skeletons?  a trove of treasure? -- is still unsolved.  There is also the mystery of its reputation of being haunted.  How did this come about?

It is longstanding, or so I find from IndiaMike's blog.

"The footsteps of the Governor's wife can still be heard," a student researcher told him.

A taxi-driver waxed garrulous on the subject.  The security staff keep on changing their shifts, he claimed, as they don't like to keep post at night.  They haven't complained, however, because they are afraid of losing their jobs.

Apparently some workers have been killed during the building of a new edifice on site, adding their ghosts to the legend.

Librarians staunchly deny that Belvedere House is haunted.  They apparently haven't said anything about the secret room, either.
Posted by World of the Written Word at 9:34 AM
Email ThisBlogThis!Share to TwitterShare to FacebookShare to Pinterest