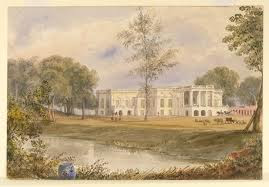 A real-life, perhaps "true crime" mystery has unexpectedly come to light, with the renovation of India's National Library, historic Belvedere House, in Alipur, near Calcutta.
According to Jhimli Mukherjee Pandey, writing for The Times of India, Belvedere House has always had the reputation of being haunted. Now, architects working on the restoration of this great eighteenth century building have uncovered a good reason for it.  They have discovered a secret room -- a mysterious space about 30 metres square, with no openings into it.  Not even trapdoors.  Just the suggestion of a bricked-in arch.

Belvedere House was built in the 1760s by Mir Jafar, who gifted it to the first Governor-General of India, Lord Warren Hastings.  In 1854 it became the official residence of the Lt. Governor of Bengal, and remained so until the British capital moved to Delhi.  After Independence, the National Library was moved to the building, the librarians apparently taking stories of ghosts in their stride.

Recently, the books were moved out to temporary storage nearby, while the Archaeological Survey of India restores Belvedere House to something like its former glory.  And that was when the architects discovered this large blank space.

Lengthy negotiations are taking place, to secure permission to open it up.  Naturally, speculations are rife.  Was it a death chamber?  Did one of the British Governors have secrets to hide?  Eighteenth century politicians in India were rather fond of walling people up, according to legend.  Or was it a treasure vault?

"It could be just about anything," said D V Sharma, regional director of the Archaeological Survey.  "Skeletons and treasure chests are the two things that top our speculations because it is not natural for a building to have such a huge enclosure that has no opening."

But how to find out what secrets it holds?  The current plan is to open up a small hole, once permission has been granted, and poke in a searchlight and a camera.

"We are eagerly awaiting the first look inside," said historian Barun De.

And so are we all.  Watch this space.

Posted by World of the Written Word at 1:18 PM
Email ThisBlogThis!Share to TwitterShare to FacebookShare to Pinterest