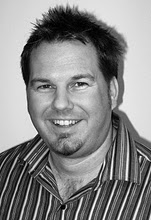 I have just opened my copy of the latest Listener, just arrived in the mail, and have found a great article by Guy Somerset, profiling Craig Sisterson, KiwiCrimeWatch blogger (see RH menu; also picture, right), the upcoming decision on Kiwi Crime-writer of the Year (aka the Ngaio Marsh Award, inspired and organized by said Craig Sisterson), and the growing respectability of crime writing in New Zealand.

Fascinating stuff.  I have to admit that my own crime reading as a youngster was Ngaio Marsh, Agatha Christie, or Leslie Charteris.  (Anyone reading this young enough to remember The Saint?)  I was convinced that all crime writers were English.  Then I found American crime writers, who seemed to be in a different genre altogether.  Great stuff, but Different.

So, when I was asked by my agent to think up a crime series, who did I turn to?  Agatha Christie.

What an odd model for a historical maritime mystery series, is all I have to say now.  But it worked.

Now, there is huge interest in new young bloods, like Vanda Symon, Neil Cross, and Alix Bosco, the finalists in this big new award, the result of which is to be announced in Christchurch on 30 November.

Congratulations and best of luck to all these wonderfully talented young people.

But still there is a mystery.  What interests me is how little attention is paid in New Zealand to a major modern mystery/thriller writer.

I wonder why?
Posted by World of the Written Word at 7:50 PM
Email ThisBlogThis!Share to TwitterShare to FacebookShare to Pinterest

Must add Anne Perry to my TBR mountain...

I keep on waiting for someone to divulge Anne Perry's real name -- but I guess my readers are too young.