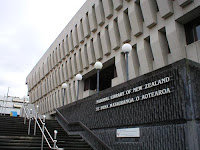 There has been a great deal of off-list interest in my posting on the Select Committee hearing into the State Sector Management Bill, much of it from researchers, authors, and librarians overseas.
As I described, there are serious concerns about the impact of the proposals to combine the National Library (including the internationally iconic Alexander Turnbull Library) with the National Archives and make the catch-all body a sub-department of Internal Affairs.
A submission was made by conference call from Auckland, by the head librarians of the Auckland City Library and the Library of the University of Auckland, Janet Copsey and Sue Cooper, where concerns were expressed that the full function of the National Library is not appreciated.   They likened it to the 1980s debacle of selling off the Government Printing Office.  The Government at the time, reckoning that it was just a printing business, sold it off at fire-sale rates to Graeme Hart (creating a local millionaire) and then realized belatedly that the Government Printer had been the issuer of Parliamentary printed documents, a role that no ordinary printer could ever fill.

The application of the Guardians Kaitiaki of the Alexander Turnbull Library, with a draft of their submission, can be read here.

And an excellent summary of Dr. Donald Gilling's arguments, made in the context of his application to make a formal submission, can be read here.

For those interested in the positions of those who use the New Zealand National Archives, their thoughts are also online.  To read all the arguments made by wise historians, librarians, and archivists, trawl through the list on this page.

There are, as you will see, two pages of submissions, evidence of the deep concern felt throughout the country.  It is nice that it is all online -- that New Zealand is an open society.

My own thought is that it is very strange when the national historical and bibliographic heritage becomes part of the department that issues passports.
Posted by World of the Written Word at 9:58 AM
Email ThisBlogThis!Share to TwitterShare to FacebookShare to Pinterest