A photographic history of mining in early New Zealand 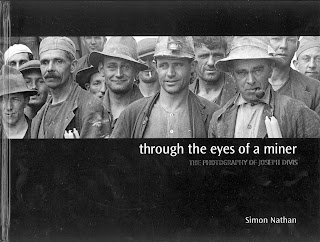 Writing my commentaries on the politics threatening to affect the Alexander Turnbull Library was very pleasantly interrupted when geologist and historian Simon Nathan arrived with a pre-launch copy of his latest book, through the eyes of a miner, The Photography of Joseph Divis.

Published by Wellington bibliophile Roger Steele, this photographic history is a beautiful production, certainly worthy of its author's pride.  What always strikes me is Simon Nathan's quiet but intense enthusiasm for his project.  He radiated a real affection for Joseph Divis, a curiously lonely man who migrated to New Zealand from Bohemia (now part of the Czech Republic) via Germany in 1909, then kept body and soul together hacking at the unforgiving rock in mines with resonant names like Blackwater and Martha, while he photographed his bleakly spectacular surroundings and his companion labourers as a hobby, in the hope it would become his career.

At times he was given hope, as the now defunct Auckland Weekly News bought and boldly featured his work, but his ambitions failed, in the end.  Ultimately, this is a sad story, but there are wonderful revelations along the way.

Every good tale needs a hook, and this one is no exception.  A pioneer in the art of time lapse photography, Joseph Divis made a habit of sneaking into camera range before the shutter snapped.  Often he was holding the trusty bicycle that got him from place to place; occasionally he managed to get to the middle of a group; and sometimes he posed alone, as a marker to emphasize the immensity of the scenery.  And almost always he was wearing a hat.

His collection of hats was amazing, a testimony to male fashion of the time:  I enjoyed the array of homburgs, trilbies, and boaters almost as much as I relished the solemnity of his fixed gaze.
Most gripping, however, are his studies of his fellow miners.  They are pictured above ground, waiting for the next shift, and below ground, creeping into crannies with their candles, to hunker down by boxes of dynamite, and enjoy a mug of tea.  Through Divis, you participate in their social activities, too -- parties, school concerts, weddings, even the occasional hangi.
Strongly recommended for anyone who loves the history that was captured in fine old photography.  Simon Nathan will be talking about his book at Turnbull House, Wellington, at 5:30 pm on 10 November.
Posted by World of the Written Word at 4:49 PM
Email ThisBlogThis!Share to TwitterShare to FacebookShare to Pinterest

This one's going on my wish list! Thanks for the review, Joan.