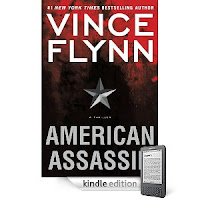 Vince Flynn, a bestselling American writer of political thrillers, has inadvertently triggered a fascinating political situation with his latest, called American Assassin.
I have to admit that Flynn's name was unfamiliar to me, probably because his corpse-strewn, neo-con thrillers are warmly recommended by Glenn Beck.  A feature in MediaBistro.com snagged my attention this morning, though, because it relates to the ebook vs. hardback topic that is so relevant right now.

Buyers of American Assassin are infuriated because the kindle version is only twelve cents cheaper than the hardback-- $14.99 and $15.11, respectively.  It hasn't done Flynn's sales any harm, the kindle book being #1 in the paid bestsellers list, and the hardback #3, but his fans are distinctly unhappy.  Ebooks are much cheaper to produce, they argue, and the price difference should reflect this.

"Greedy" publishers and authors are pilloried in the heated discussions that have sprung up on the Amazon site, no one having taken heavy discounting of the hardback (in response to Amazon.com policy) into consideration.  There is more than discussion going on, however -- the offended fans have taken to facebook, twitter, and all the other social networks, and mounted a Campaign.  And it looks as if those who make policy at Amazon are doing a rapid rethink.
Latest news is that Amazon no longer publicize the ebook:  on the American Assassin page, there is no link to the kindle edition.  And, when you finally find it by devious means, the price is no longer available.  It will be interesting indeed to see what happens next.

But how does this affect the so-called "greedy"authors and publishers?  It is more important to them than it might seem, at first glance.  "At least with the hardcopy book, I can lend it to a friend, or take it to a used book store and trade it for something I haven't read yet," comments William Smith of Kingston, NY.  This certainly snared my attention.  Used book stores do not yield royalties; and unless friends turn around and buy another book by that same author at a regular store, there is no financial gain to the author or the publisher at all.  If a kindle book can be sold only once, however, the benefits are obvious.

Perhaps authors should be mounting their own campaign, in support of realistically priced ebooks.
Posted by World of the Written Word at 10:59 AM
Email ThisBlogThis!Share to TwitterShare to FacebookShare to Pinterest

Very interesting! I had never considered the used book issue with Kindle and other e-readers. Authors hate to see that "Buy it Used" link on Amazon, selling books for a fraction of the price and no royalties or credit for the sale goign to the author. I'm sure Amazon weighed the hit the used market would take against the benefits of Kindle. For the author, I don't think e-book vs. printed matters all that much, but if it takes a toll on used books that could be a real benefit to us "greedy authors".