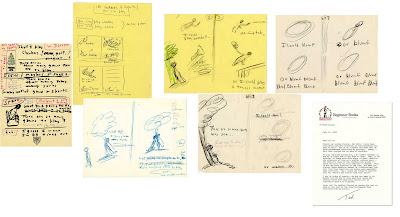 It has been hidden from view for almost forty years, but now it is up for sale at Nate D. Sanders auction house -- an original Dr Seuss handwritten book.

According to MediaBistro.com, the master wrote just the first seven pages, and an assistant created the next twelve, but you can see Dr Seuss corrections throughout.  It also doesn't make much sense, being a germ of an idea for a book on sports -- "All Sorts of Sports.  Shall I play checkers?  Golf? Croquet? There are so many games there are to play" -- but the wackiness and rhythm are plain to see.

The collection includes a typed letter, signed "Ted" (for Theodor Seuss Geisel) and dated July 11, 1983.  It discusses the master's reservations about the idea, saying that a story about a hero who flubs a catch at any ball at all "will make him schnook."  In short, Dr Seuss had a very strong feeling that the reader's first reaction would be, "What's the matter with this dope?"

The auction house was offered the item by one of the master's former assistants, but whether it was the actual assistant who created the last twelve pages is not revealed.  Nevertheless, it certainly has appeal.  The auction closes on Thursday, October 21st at 5 pm US Pacific Time.
Posted by World of the Written Word at 2:46 PM
Email ThisBlogThis!Share to TwitterShare to FacebookShare to Pinterest