Blood letting, blistering, and burying to the neck in sand were some of the treatments used ­ with varying degrees of success ­ by surgeons of Britain’s Royal Navy to treat patients from the late 1700s to the late 1800s, as government records released Friday show. 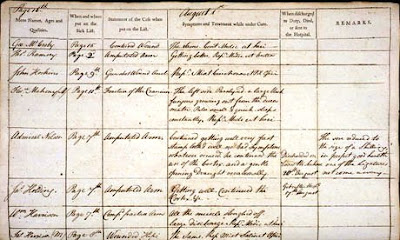 Britain’s National Archives has cataloged and made available to the public journals and diaries from surgeons who served on ships and in shore installations from 1793 to 1880. The archive represents “probably the most significant collection of records for the study of health and medicine at sea for the 19th century,” said Bruno Pappalardo, naval records specialist at the National Archives.

Rum was the treatment of choice aboard HMS Arab during a voyage to the West Indies in 1799 and 1800. A surgeon writes that “application of rum” to the area of a scorpion or centipede bite helps prevent paralysis. The same surgeon mixed rum with oil to treat a tarantula bite.
Aboard HMS Princess Royal in 1801, tobacco was thought to have curative properties. A man who had fallen overboard and was submerged for 12 minutes was brought back aboard the Princess Royal with the appearance of a corpse, surgeon Ben Lara wrote. The victim was dried and warmed by hot water bottles and then tobacco smoke was pumped into his lungs through a tube. After almost an hour of treatment, a pulse was detected and the man lived, according to the journal....

Read more.
Posted by World of the Written Word at 7:39 PM
Email ThisBlogThis!Share to TwitterShare to FacebookShare to Pinterest