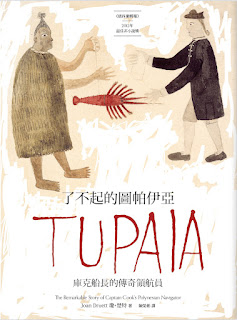 My biography of the great Polynesian navigator, priest, and diplomat, TUPAIA, has been out for a while now, and has gone into several editions.  The cover of the Chinese language edition, published in Taiwan, is shown above.

But somehow, in the interval, I missed a number of reviews, probably because I was at sea.

So it was a big surprise when I finally got around to checking Goodreads (mainly because I am trying to set up a page for my new novel, Daughters of the Storm) to find a review of Tupaia by "Alison", who must be one of the most thoughtful reviewers I have had the privilege to read.

And here it is:

I expected this book to tell an important story, but I hadn't expected it to be this enjoyable to read, honestly. It stands as one of the most engaging accounts of Cook's voyages I've read (and I've read a few) even without its most important achievements - allowing space for a Tahitian viewpoint alongside the British, and celebrating the incredible life of one of the most important figures in early European-First Peoples engagement in the Pacific.

Druett's research delved deeply into both ship logs and journals, and also into Polynesian history and culture, she has then drawn all this together into a trustworthy, detailed and intriguing biography of a brilliant, prickly, and hugely influential figure in Tupaia. Along the way, she draws striking portraits almost in passing of both Cook and Banks, as well as Tahitian leader Purea. This process never feels like work for the reader, belying the considerable scholarship that underpins the book.

By alternating viewpoints between the British and the Polynesians, the book highlights the many, many misunderstandings, the groping towards communication, that constituted "first contact". Although this is the first encounter with a radically different culture for both the Polynesians and the British/French, it is notable how much faster the Polynesians catch on to that reality - that this group of people have a different set of *values* - than the Europeans do. It isn't that the Brits don't understand that the laws and customs are different, but rather that they judge these by their own standard - so 'theft' of items is 'mischievous', and they assume that land is for a ruler to exchange. This dismissiveness of other cultures leads to the worst, avoidable, massacres.

One of the most revealing part of the book is the encounter between the Guugu Yimithirr of FNQ and Cook's crew. Tupaia has no cultural or linguistic advantages over the British here, as this is a culture far removed from Polynesia. However, he is still the figure to establish friendly relations. He achieves this feat by, putting his weapons down, and, sitting down to talk. This simple act - to sit - is not something that the Europeans have tried in any of the many voyages to date (after this, observing the success, Cook tries it a lot). It seems inconceivable, really, that such a simple act was such an innovation. But underpinning it is a totally different approach to the encounter than the British brought. To sit, invites listening, settling in, an offer of time without immediate objective.

You see this refusal to listen in a number of the British actions. Particularly the worn tactic of *kidnapping* people to, essentially, make them listen. The fact that Cook (and later in Botany Bay, the First Fleet) decide to kidnap locals in order to show them the benevolence of the British is a direct result of assuming that what you are offering is the only thing worth talking about, not what is already there. The once exposed to your worldview, goods, and customs, people will automatically want them, irrespective of what they already have (which you are totally uninterested in).

And the British (and the other Europeans) were there to achieve objectives - to take resources, including land, by negotiation, purchase or force. Such an objective carries so many assumptions within it - particularly about property - that true cultural exchange was never going to occur.

One of the greatest myths of European arrival in the Pacific and Australasia, is that the boats were the most exciting thing that Polynesian and Aboriginal peoples had seen. In reality, as this book amply demonstrates, these events were viewed in terms of their local worlds - particularly, as to how the arrivals could be turned to advantage in local politics and warfare. The host peoples weren't living static or unchanging lives, just because their cultures were long-lived. Rather, they were complex and often tense societies, engaged in the same process of shifting power balances and changing environmental conditions that mark all peoples.

In granting complexity to the Tahitian culture, and in examining how this shapes Tupaia's choices, Druett also grants the same complexity to the British. She delves into the complex set of pressures upon Cook, and also his crew, taking into account how class and hierarchy constructions in British society also shape their choices. If to some extent Banks and Cook emerge with their usual stereotypes - Banks as a brilliant polymath rich kid, carelessly wielding his financial power to get exactly what he wants, Cook as a driven working-class escapee, a true believer in military hierarchy, especially equally applied, brutal discipline, with a brilliance single-mindedly directed to charting territory - it is because truth is not always new revelation. And you can see how both men's flaws hamper Tupaia's legacy - Cook's resolute focus leads him to disregard a very different kind of navigational brilliance, and his dislike of aristocratic polymaths doesn't endear Tupaia to him at all - Banks, on the other hand, whose intellect and class background are so similar to Tupaia, is clearly not fond of rivals, but also is far too careless to provide either the sponsorship or engagement needed to fully appreciate Tupaia, or even to keep him alive.

My only real criticism of the book is that at times, the author, allows her frustration with Cook to colour the text. An example is the near-obsession with the role of scurvy in killing Tupaia. it is understandable that Druett is infuriated with Cook's attempts to downplay the role in scurvy, but honestly, it seems a minor point in the history to me. A far bigger tragedy is the blindness of both Cook and Banks to how many times Tupaia had saved their butts, and how much they could have learned by taking him more seriously.

But again, in reading detailed accounts, it is always easy to lose the forest for the trees, or the war for the battle. These journeys, no matter what the personalities of the crew and scientists aboard, were always to end in tragedy. Because they were ultimately intended to conquer, to impose European ideals of property and monarchy on the populations in order to exploit and obtain resources. The kind of world in which first encounters were mutual respectful exchanges - first encounters which peoples had managed for millenia, no doubt - were not going to happen under these circumstances. It isn't the number of times Cook lost his temper that was the problem, it was why he was there at all.

Posted by World of the Written Word at 1:26 PM
Email ThisBlogThis!Share to TwitterShare to FacebookShare to Pinterest