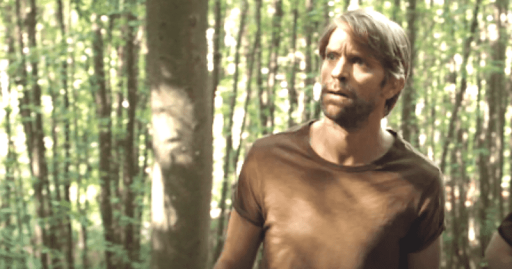 Since subscribing to Netflix, I have become intrigued with foreign TV series.  I have always enjoyed foreign films -- 4 Minutes, a German movie currently on Netflix, being an outstanding example.  So I embarked on Nordic noir, started with the Icelandic Trapped  (great!) and moving onto Finnish Bordertown (complicated), after enjoying the French series Bonfire of the Charity (terrific).
And somehow, through it all, I became intrigued with the languages.  I don't use the dubbing option, as it always ends up clunky, so the original language, with subtitling (which of course I do not trust) works best for me.  Both Icelandic and Finnish languages were riveting.  How do people communicate in those tongues?  A constant amazement.
So, I graduated to Capitani, which is in -- wait for it -- Luxembourgish.
It is set in an awful village, full of gossips, intrigue, malice, men with untidy designer stubble, which is surrounded by a lot of monocultural sort of forest.  The country is Luxembourg, of course.  I think I might have been there -- or, more precisely, have driven through it.  This series is no sort of promotion for the country, which is lucky, because it isn't.  If you get what I mean.
The language, though, was immediately fascinating, and was one of the two features that kept me watching.  Seemingly it is a mixture of three languages, perhaps four, because I caught the occasional English word or phrase.  There is a lot of German, and quite a lot of French, though the students in the local school have French lessons, which they hate.
The plot is standard thriller stuff.  A teenaged girl is found dead.  She was a twin.  The other twin materializes after a few days, with no explanation -- ever -- of what she was doing in the meantime.  They are identical twins, acted by the same girl.  There is also a very active drug ring operating in this very awful village.
A detective arrives to solve the crime, and is partnered by a local female detective, and they do not get along.  Everyone is very badtempered.  And the plot is full of holes.  Like the girl's absence, there is a lot that is never explained or revealed.
So why did I keep watching?
Because of the detective, Luc Capitani, who is acted by Luc Schiltz (one has to take care when typing that name).  He is scruffy, supremely dislikeable, but absolutely and compellingly watchable.
I predict a fine future for this fellow.  He projects like a laser, and has magnetic eyes, like Sam Neill.  Watch for him.  I will be.
Posted by World of the Written Word at 10:37 AM
Email ThisBlogThis!Share to TwitterShare to FacebookShare to Pinterest