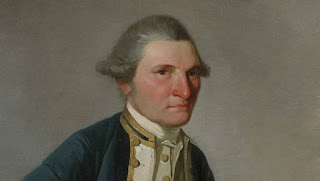 
A rare portrait of Captain James Cook has sold at auction for $227,621.
Christie's, the famed London auction house, had estimated it would fetch between £100,00 and £150,000 (NZ$200,000-$300,000).
The price includes the 25 per cent buyer's premium, meaning the £112,500 price was lower than hoped.
Christie's asserted the oil painting was by John Webber, the official expedition artist on Cook's third and final Pacific voyage. It's thought he finished the portrait in London after the voyage was over and Cook was dead.
But he knew Cook "intimately", according to Christie's, and the portrait may depict the true man compared to Cook merchandise painted later.
The painting was owned by wealthy California collector Richard Kelton. The identity of the new owner was not disclosed.
The portrait was unknown until Christie's sold it in 1998.
At the time, the auctioneer didn't think it was by Webber but experts detected his "hand" in Cook's face.
Posted by World of the Written Word at 8:06 AM
Email ThisBlogThis!Share to TwitterShare to FacebookShare to Pinterest