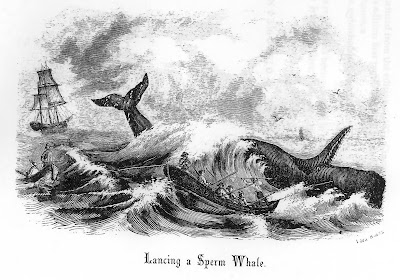 Maureen Dowd uses the image from Melville's Moby-Dick so neatly (and it also contains such neat new words), that I cannot resist blogging it.


Donald Trump is a rodomont. Not to mention a grobian. And, of course, a Sinon suffering from proditomania.
With Trump firmly lodged in our heads, it is understandable if we have all become a little conspiracy-minded.
Case in point: A few weeks ago, someone signed me up for A.Word.A.Day email from Wordsmith.org. Soon I began to detect a pattern.
Friday’s word was vulgarian, following close after bareknuckle. Others included rodomont (a vain boaster), grobian (a buffoonish person) and Sinon (one who misleads and betrays). Also chirocracy (a government that rules with a heavy hand) and froward (difficult to deal with or contrary).

Sound like anyone you know?
Since this is a town of fevered conspiracists now, theories abound about why the president went to Walter Reed military hospital last Saturday. But nobody here buys that it was a spontaneous desire to do Phase 1 of a physical.
As Trump himself said Friday about it, “A lot of things are a matter with me.” But we do know the name of one severe malady the president has: proditomania. A.Word.A.Day defined it as the feeling or belief that everyone is out to get you.
Trump believes that paranoia can be useful. He sees the world as vicious and life as a battle for survival.
As we draw closer to Trump getting a lump of coal in his Christmas stocking, with Nancy Pelosi implacably heading toward a holiday impeachment, his proditomania is revving up.
Even Steve Doocy looked a little bemused during Trump’s shambolic 54-minute call into “Fox & Friends” on Friday.

No matter how many experts — including the gloriously bracing Fiona Hill — explain that it is Russia that interfered with our elections and that Russia has been scheming to deflect blame to Ukraine, Trump keeps rambling about that D.N.C. server.
“The F.B.I. went in, and they told them, ‘Get out of here, we’re not giving it to you,’” he said on Fox. “They gave the server to CrowdStrike, or whatever it is called, which is a company owned by a very wealthy Ukrainian. I still want to see that server.”
Trying to justify why he had ousted and smeared the ambassador to Ukraine, Marie Yovanovitch, he claimed that she was “an Obama person” who had refused to hang his picture in the U.S. Embassy in Kyiv. (A lawyer for Yovanovitch said the portrait had been hung immediately.)
“This was not an angel, this woman, O.K.?” Trump sneered, adding that when he complained that the dignified and well-respected former ambassador was being treated too gently, he was told: “Well, sir, she’s a woman. We have to be nice.”
It was peak Trump pique.
After climbing up in politics by putting down Barack Obama as an illegitimate president, Trump is so terrified of being seen as an illegitimate president that he acts out in ways that cause more people to see him as an illegitimate president.
His presidency began with him obsessing on his inauguration crowd size and carrying around his 2016 electoral map.
He can’t get past it and it’s intensifying, playing out on the world stage with national security implications. It’s debilitating to his presidency, and the rest of us are hostages to his insecurities.

As Hill succinctly noted about the inability in the Trump era to separate fictional narratives from objective realities: “Our nation is being torn apart. Truth is questioned.”
Vladimir Putin hit the jackpot with Trump. He makes a perfect sucker for the former K.G.B. spy.
“Thank God nobody is accusing us anymore of interfering in the U.S. elections,” Putin gloated Wednesday at an economic forum in Moscow. “Now they’re accusing Ukraine.”
The president seems like even more of a crackpot, given the New York Times story on Friday revealing that, even as Republican lawmakers vociferously defended the president, they received a briefing “that Russia had engaged in a yearslong campaign to essentially frame Ukraine as responsible for Moscow’s own hacking of the 2016 election.”
Julian E. Barnes and Matthew Rosenberg reported that the Kremlin succeeded in spreading discord among its adversaries and sluicing false claims about Ukrainian meddling into Republican talking points. A lot of Republicans have dirtied themselves defending Trump, and their party will not easily recover from perverting its values.
Trump is blustering about impeachment and wanting a Senate trial and calling Pelosi — who has his presidency in a vise grip — “totally incompetent” and “crazy as a bedbug.”
But those who know him believe that he’s genuinely unnerved and even hurt at the prospect of impeachment.
One of his tweets Thursday, as he headed toward being the third president to be impeached, seemed to reflect a rare hint of vulnerability. “I never in my wildest dreams thought my name would in any way be associated with the ugly word, Impeachment!” he wrote.

It recalls a prescient moment from September when the president’s former homeland security adviser, Thomas Bossert, appeared on ABC’s “This Week” and warned that Trump had to let go of his conspiracy theory linking CrowdStrike, Ukraine and the D.N.C. server.
“If he continues to focus on that white whale,” Bossert said, “it’s going to bring him down.”
But, like Ahab, Trump can’t ever let go. He’s hellbent on harpooning himself, chasing that which will sink him.
Seppuku. My word of the day.
Seppuku, a Japanese word of deep meaning, refers to ritual suicide.
Posted by World of the Written Word at 11:38 AM
Email ThisBlogThis!Share to TwitterShare to FacebookShare to Pinterest