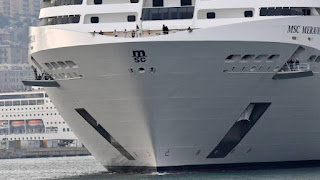 Well, I am sure I don't quite understand this buying and selling of carbon credits, but it seems, according to a story published in Stuff.nz, that MSC is heading in the right direction.


MSC Cruises will be the first major cruise company to become carbon neutral.
Starting on January 1, 2020, MSC Cruises will buy enough credits from companies that absorb carbon dioxide to offset all of the carbon emissions from its 17 ships throughout the year, the company announced Friday. That amounts to 2.2 million tonnes. The credits will only cover activities at sea.
Executive Chairman Pierfrancesco Vago said the announcement is 10 years in the making. The company is still figuring out in which projects it will invest, but plans to prioritise "blue credits", which finance projects in coastal communities.
"It's not just a question of buying credits, but we also want to make it more tangible," Vago said. "The blue credit is a way where we want to invest through the MSC Foundation to create farming in the sea through kelp and algae, which have proven to be one of the best CO2 absorbents today."
Geneva-based MSC Cruises is the world's fourth-largest cruise company; its US headquarters are located in South Florida. MSC plans to build a new US$300 million cruise terminal and headquarter office at PortMiami, with completion by 2022.
The company's decision to pay to offset its environmental impact comes as the industry is trying to reduce its overall emissions. Cruise companies are working to make ships more energy-efficient by redesigning hulls to prevent friction, installing LED lighting and fitting ships with shore power - the capability to plug into local electrical grids while at port and eliminate emissions.
Every MSC ship launched since 2017 has shore power, including two that are currently based in Miami. But, Miami-Dade county's PortMiami does not allow for shore power, meaning the zero-emission technology is wasted as those ships idle their engines next to downtown.
As the industry continues to experiment with the goal of zero-emission cruising, carbon offsets present an opportunity to mitigate the damage in the meantime. They can be a bridge between now, say experts, when nearly all cruise ships rely on a technological workaround to continue using one of the world's dirtiest fuels despite stricter pollution standards, and a future where all transportation is emissions-free.
"We understand the intention is to have a zero-emission society, zero emission maritime industry," Vago said. "We also understand the technology that is available doesn't allow us to commit to totally zero-CO2 performance."
MSC's competitors, Carnival Corporation, Royal Caribbean and Norwegian, have dabbled in carbon offsets, but none of the others have achieved carbon neutrality.
Offsets allow a company to pay a certain amount to even out the amount of the greenhouse gas carbon dioxide it emits into the air. Companies like oil-and-gas giant Shell pay to plant trees, which store carbon, to make up for some of its production of global warming-inducing fossil fuels.
Carbon offsets also fund renewable energy plants that displace fossil fuel energy on the grid, like the wind farm Royal Caribbean plans to use to offset up to 12 per cent of its emissions - or 525,000 metric tonnes - beginning in April 2020.
Offsets have become popular across a number of industries. A 2016 report from Forest Trends' Ecosystem Marketplace tracked nearly 250 companies buying offsets, including Delta Air Lines, JPMorgan & Chase and Exxon Mobil.
"They see the real need. A lot of these oil-and-gas and energy companies, they can't just shut off the valve tomorrow," said Stephen Donofrio, director of the Ecosystem Marketplace and founder of Greenpoint Innovations. "What can we do in the meantime while technology and our economics kind of catch up to where our economy is today?" 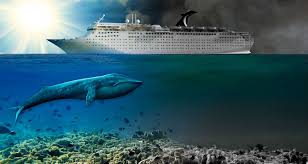 Some environmentalists criticise offsets as "greenwashing" by companies, a way to say the organisation is doing something about climate change while not changing the parts of the core business model that warm the world. The criticism hits hardest in the transportation sector, which makes up the biggest slice of all carbon emissions worldwide.
The cruise industry in particular has been the target of pushback from environmentalists who say the industry's carbon footprint is less excusable than the shipping industry because it's non-essential. Vago called concerns "fake news".
"A lot of people in this part of the world in Europe have been saying cruise ships are not environmentally friendly. That's the fake news I'm referring to," he said.
The type of credits MSC purchases will determine whether the impact is real.
Research shows that offset programmes often have a poor track record of living up to their hype. A 2017 investigation from a UK-based environmental group found one such programme continued to take money from firms like Virgin Atlantic to protect forestland that was instead developed and sold off.
"It's really completely dependent on what they do," said Timothy Searchinger, a Princeton University research scholar. "They should recognise that offsets have generally been mostly not real. But there have been chances to do better."
MSC's other commitments to lower its carbon footprint include building five new ships that run on liquid natural gas, a cleaner fuel than most ships use currently. But it comes with risks: if leaked into the atmosphere, LNG is much more harmful to the environment than carbon dioxide.
Smaller cruise companies have been able to make more substantial advancements toward zero-emission cruising than the big players. Expedition cruise company Lindblad, based in Zurich, began offsetting this year the 50,000 metric tonnes of carbon emitted by its 13 ships, all land excursions, employee travel and offices in New York and Seattle, Travel Weekly reported. Norwegian cruise company Hurtigruten launched the first hybrid-electric powered ship this year. Notably, Hurtigruten CEO Daniel Skjeldam told Travel Weekly, the company will not join Cruise Lines International Association, the industry's lobbying arm, saying the group is not doing enough to address climate change.
CLIA announced this year that the industry plans to cut the rate of global emissions by 40 per cent by 2030, which means each ship gets more efficient, even as the cruise lines continue to increase their total carbon footprint by adding new ships to the fleet.
Cruise ships are expected to draw 30 million cruisers this year on 365 ships, up from 23 million cruisers on 308 ships in 2015, according to CLIA. More than 40 new cruise ships are expected to launch in the next four years.
- Miami Herald

Having watched a fascinating program about the MSC ship Meraviglia last night, in the very good series "Mighty Ships," I cannot help but fear for the future of the cruise ports that have to face the descent of huge crowds, let alone the power demands of those ships that are fitted to take shore power

Posted by World of the Written Word at 8:29 AM
Email ThisBlogThis!Share to TwitterShare to FacebookShare to Pinterest