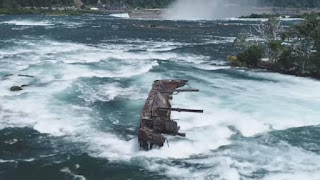 She was just a humble coal-carrying scow.  Then she became part of a world-famous natural venue.  She was stuck at Niagara Falls.  But still, she was pretty well forgotten.  Until Halloween, 2019.

From USA Today, as reported by Stuff.co.nz


A boat that has been grounded in shallow rapids near Niagara Falls since 1918 became dislodged on Halloween night and moved downriver about 50 metres.
The development was reported by Niagara Parks, an agency of the government of Ontario, Canada, in a video posted to social media on Friday. At the time, the boat was again grounded in a new location.

The agency says the boat, an iron dumping scow, became stuck after an incident on August 6, 1918, where the barge broke loose from a tugboat.
Two men were rescued in a joint effort between the US Coast Guard and local authorities. The men opened dumping doors in the bottom of the barge in a successful attempt to slow the boat from being carried away by the current, the agency says.
Since then, the boat has been remained about one-third of a mile from the edge of the Horseshoe Falls and about one-tenth of a mile from Canadian shores, according to the agency.
That is, until the night of Halloween, 2019.
Overnight severe weather and heavy currents resulted in the boat being "turned and twisted," according to Jim Hill, Senior Manager of Heritage for Niagara Parks Commission. He said the boat had also flipped on its side.
"We think it's about 50 metres downriver from its original location," he said.
The boat had been deteriorating badly, he said. The commission extensively documented it last year to mark the 100th anniversary of the rescue and grounding of the scow.
As for how long the boat will remain in its new location: "It's anyone's guess," Hill said.

Posted by World of the Written Word at 11:52 AM
Email ThisBlogThis!Share to TwitterShare to FacebookShare to Pinterest