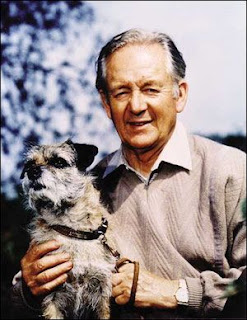 He found both animals and humans funny, but displayed a wonderful tolerance and understanding, too.

James Herriot was the pen name of James Alfred Wight, also known as Alf Wight. Born 3 October 1916, he was a British veterinary surgeon who wrote a bestselling series of semi-authobiographical books of stories about animals and their owners, notably All Creatures Great and Small.

He always wanted to write a book, but his practice in Yorkshire kept him so busy that he didn't sit down at a typewriter until the age of fifty.  Like most new writers, he collected rejection slips for a while, then realized that he had to focus on something he knew really well--life as a rural vet.  If Only They Could Talk was the result, and was published in 1970, under a penname he chose after watching a Scottish football goalkeeper, Jim Herriot, on TV.

Sales were slow, but his publishers, Michael Joseph, accepted a second book, which didn't look promising, either, until the New York publisher, St Martin's Press, published both books in a single volume, called All Creatures Great and Small.  It was an instant success, leading to many sequels, and movie and TV adaptations.

James Herriot passed away in 1995, at the age of seventy-eight.

Posted by World of the Written Word at 5:09 AM
Email ThisBlogThis!Share to TwitterShare to FacebookShare to Pinterest