Bronze age writing to be deciphered 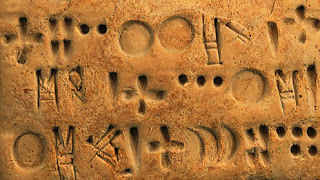 The world's oldest undeciphered writing system, which has so far defied attempts to uncover its 5,000-year-old secrets, could be about to be decoded by Oxford University academics.

"I think we are finally on the point of making a breakthrough," says Jacob Dahl, fellow of Wolfson College, Oxford and director of the Ancient World Research Cluster.

Dr Dahl's secret weapon is being able to see this writing more clearly than ever before.

In a room high up in the Ashmolean Museum in Oxford, above the Egyptian mummies and fragments of early civilisations, a big black dome is clicking away and flashing out light.

This device, part sci-fi, part-DIY, is providing the most detailed and high quality images ever taken of these elusive symbols cut into clay tablets. This is Indiana Jones with software.

It's being used to help decode a writing system called proto-Elamite, used between around 3200BC and 2900BC in a region now in the south west of modern Iran.

And the Oxford team think that they could be on the brink of understanding this last great remaining cache of undeciphered texts from the ancient world.

READ MORE
Posted by World of the Written Word at 6:11 PM
Email ThisBlogThis!Share to TwitterShare to FacebookShare to Pinterest