Writing to Santa from a lighthouse

Children of lighthouse-keepers had a unique Christmas conundrum 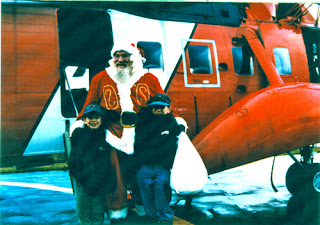 "How do I know that Santa will get my letter?"

by Lynn Salmon 2011
When you are a child living at a remote light station on the coast of British Columbia, a major concern near Christmas time could be "How will Santa Claus know where to find me?" Pen Brown, filled this role for many years, assuming this unique responsibility in 1978 when George Thomas, the original light station Santa Claus, retired.

The annual event was a volunteer effort with contributions of presents and goodies supplied by coast guard staff and participating light station families. Light houses received periodic visits from a supply vessel and during a week–long supply trip in December; Pen Brown would travel with the ship as it visited each light, accompanying the crew on their rounds. Those stations with children would get a special visit from Santa – an eagerly anticipated event by the thirty or more children who once lived on the different lights with their families. Presents were ordered, wrapped and loaded onto the supply vessel for Christmas delivery and when necessary, Pen would travel to the light station via helicopter. Initially a Santa suit was rented each year from the T. Eaton store in Victoria but one year two women living at the Estevan Point Light sewed up a custom suit for him to wear.

Read the rest.
Posted by World of the Written Word at 8:32 AM
Email ThisBlogThis!Share to TwitterShare to FacebookShare to Pinterest