Revisiting the Competition for Best Rose 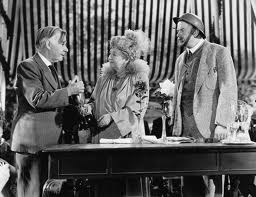 We watched the 1942 movie Mrs Miniver last night.
It's the famous WW2 movie that so moved President Roosevelt that he reportedly had leaflets printed with the final speech by the vicar with its "We will fight on the beaches etc." kind of message, and had them dropped over Europe.

It is a clever piece of work, definitely propaganda, with also with definite charm, particularly when the year of its first screening is remembered.  Though it was filmed somewhere in North America, there is an English "feel" about it, complete with haughty dowager who rules the riverside village with a feudal hand ... and Greer Garson (who got an Oscar for her role) is peerless.   The scene in the air raid shelter is particularly well done (watch the cat gradually get more nervous as the whistles and bangs of bombs get closer; fine acting, that).

Anyway, we were intrigued to see a whole scene from the hit TV series Downton Abbey played out before our very eyes.  Mr. Ballard, humble rose-grower and station master (Henry Travers) wants to win the Beldon Cup for his beautiful red rose.  The Cup, however, belongs by feudal right to Lady Beldon (Dame May Whitty; and yes, they do give her title in the credits), who wins it every year.  Mrs. Miniver, however, persuades Lady B. to weaken -- by sheer body language, apparently.  "You have that look in your eye," the grand dame complains, and lo, the prize is awarded to the station master, who goes all faint and overcome.

Remind you of an episode in series one of Downton Abbey?

We certainly blinked at the coincidence -- to the extent that we were almost reciting the lines before Mrs. Miniver and Lady Beldon.

Of course we weren't the first to notice the striking coincidence.  As far back as October 2010, Christina Jarvis from Essex wrote to the Daily Telegraph say she had been "slack-jawed" as she watched "the flower-show contretemps" in the latest episode of Downton Abbey, saying "precisely the same situation appeared in the film Mrs Miniver", which she had seen the previous week.

Well, people can be inspired by all kinds of books and films, often unconsciously (though the striking similarity of the rose competition scenario is stretching the word "unconsciously" a bit), and many of the situations in Downton Abbey go all the way back to Addison et al.

What is really amusing is to find out that the creator of Downton Abbey has a really, really thin skin.  Julian Fellows has won all kinds of awards and has done extraordinarily well, so one would expect him to be quite airy about it, when challenged.  Instead, as the Telegraph reported on an incredulous note, when he was asked about the apparent similarities, "Fellowes accused this newspaper of being part of a left-wing conspiracy."  There is "a permanent negative slant" in the press, he snarled.

What a shame the term "hissy fit" is too modern for him to use in a script.

More gossip: Richard Ney, who plays Greer Garson's son in the movie, was only 11 years older than she. They fell in love, and married (disastrously) the following year. When he left her, such was her popularity that his Hollywood career was ruined.  But never mind, he became a very rich financial trader.
Posted by World of the Written Word at 4:30 PM
Email ThisBlogThis!Share to TwitterShare to FacebookShare to Pinterest

Mrs minivers screamed out to me in every scene about the roses and the cup--a straight steal and the writer should own up to it and other plaigirisms (of plot if not of actual words).

I just watched Mrs. Miniver over the weekend. In my opinion, it is a clear case of plagiarism. It's the kind of thing where you just sit there with your mouth open in disbelief.

One more thing. There's a Disney film with Sean Connery called "Darby O'Gill and the Little People." It's worth checking out. In the film, there's a character who is an old woman who schemes in order to secure a better position for her evil son. When I saw the film, I said to my wife: "That's Mrs. O'Brian from Downton Abbey!" I'm not saying that this was deliberately stolen but there is a strange resemblance to the characters.

I'll watch for it! I'm beginning to wonder if there is any originality left in film. Saw "Eragon" last night and every moment screamed of "Lord of the Rings" -- and the theme itself is pinched from Anne MacCaffery. And as for those copycat cooking and survivor and you've got talent shows. Oh dear.

I guess that's why I liked the interactive cookbook. At least it was original.

I'm a bit late getting to the Downton Abbey series...I've been catching up watching it this week on Netflix. Up to episode 5 - agree, I was stunned as the 'rose episode' unfolded...not only was it plagarized from the script - Mr. Fellowes even 'stole' the shot of the prize letter - where the camera shows that Lady Grantham is the winner...there is the IDENTICAL scene in Mrs. Miniver - where the winner's name, Lady Beldon, is on the judges' piece of paper - the camera shows this - but then you see Lady Beldon/Lady Grantham award it instead to Mr. Ballard/Mr. Moseley.
Of course, Maggie Smith is old enough to have seen the original when it came out...(she must've laughed to herself to find herself in that identical role as Dame May Whitty).

Too bad that Mr. Fellowes couldn't think of the word "homage," as I did when I watched Mrs. Miniver this evening.

Yeah, I just watched Mrs. Miniver for the first time and its got to be one of the most egregious(and disheartening, being a Downton fan) forms of plagiarism I've encountered in film.

I saw Mrs. Miniver years ago, but when I saw the Downton Abbey flower show plotline (just a few weeks ago, as I have just discovered this TV show) I was flabbergasted that the writer would SOOOOO blatantly lift a storyline. I cannot take even the least bit serious his claim of subconscious plagiarism - a screenwriter that does not recall the plot of a major film he has seen - POPPYCOCK! Couldn't he have at least put some variation in there - made it a dog show or whatever and presented the dilemma of feudal privilege vs. genuine merit in a slightly different way. He is a screenwriter for crying out loud. The resemblance to Mrs. Miniver would still have been there, but it would not have been such an embarrassing mishap.

The plotline was used with the dogshow angle in an episode of All Creatures Great and Small.

Did anyone also notice the theft of the plotline regarding the alleged murder of Bates' wife, which turned out to be suicide, bears a remarkable resemblance to the plot of the 1945 movie “Leave her to Heaven” starring Gene Tierney, Cornel Wilde, where the wife in that movie also kills herself, then tries to frame her surviving husband for the murder? Hmmm, interesting!

" Richard Ney, who plays Greer Garson's son in the movie, was only 11 years older than she. "

Don't you mean that Ney was 11 years YOUNGER than she (Garson)?

How right you are! Amazing that it took so long for anyone (including me) to notice.

"Richard Ney, who plays Greer Garson's son in the movie, was only 11 years older than she."

I think you have this backward. Richard Ney was younger, not older, than Greer Garson.

It's always annoyed me that a couple's age difference was---and still is---noteworthy when the woman is older than the man.

PS I remember when I first saw the Miniver subplot show up on DA, and how I was amazed at how blatant Julian Fellows' plagiarism, er, borrowing was.