Turner may have applied overheard science to his paintings 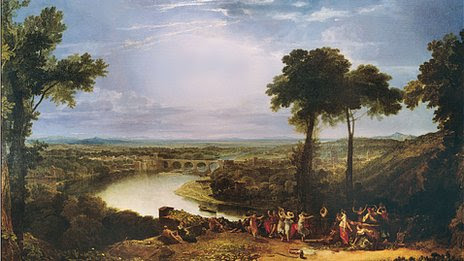 Biographer James Hamilton says Turner used Sir William Herschel's discoveries about the sun in Festival of the Opening of the Vintage at Macon
Artist JMW Turner's work may have been influenced by scientific theories that he overheard, new research suggests.
While the painter was in the Royal Academy, he was in the adjacent rooms to where scientists of the Royal Society held regular meetings.

Turner biographer James Hamilton says the thin walls would have allowed the artist to overhear their discoveries.

He believes one of Turner's works makes use of Sir William Herschel's theories about the sun.

In an essay written in new book Turner and the Elements, Mr Hamilton looks at the artist's treatment of the natural world.

He writes that as Turner was in close proximity to the scientists at London's Somerset House, now occupied by the Courtauld Galleries, "cross fertilisation" would naturally have occurred.

Mr Hamilton also notes that two years after Sir William Hershel lectured the scientists on the "ridges, nodules and corrugations" he had observed in the surface of the sun in 1801, Turner was also creating the effect within a painting.

In the 1803 painting The Festival of the Opening of the Vintage at Macon, the artist appears to have painted the sun in the way Sir William had described it.

The biographer adds that Turner was fascinated by science and was also friends with mathematician Mary Somerville and scientist Michael Faraday, who helped him test the durability of his pigments.

The new book comes ahead of the upcoming Turner and the Elements exhibition which will open on 28 January 2012 at Turner Contemporary in Margate, Kent.

Posted by World of the Written Word at 8:34 AM
Email ThisBlogThis!Share to TwitterShare to FacebookShare to Pinterest