It has been remarked in publishing circles that modern children's literature seems largely immune from digitisation. 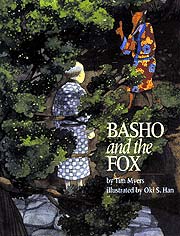 
Amazon announced Tuesday afternoon that it has a deal to acquire Marshall Cavendish Children's Book's US trade publishing list, comprising more than 450 children's books.  This means that they will acquire multi-award-winners and NYT children's bestsellers, such as the brilliantly illustrated Basho and the Fox.
Does this mean that these books will be digitised?  You bet.
"We look forward to working with these respected authors and illustrators," runs the statement. "We will continue to publish these books in their handsome print editions and we think customers will love reading these books — most of them never available before digitally — with their families, using the brilliant color touchscreen on the Kindle Fire."
Well, it is good news that they will publish these books traditionally, too.

It must be noted that Marshall Cavendish already has a digital arm, though most of the titles are not available as eBooks.  Whether Amazon will take the outstanding digital rights over is not stated, as the terms of the deal were not disclosed, but it is certainly a given.
According to Publishers Lunch, Amazon will publish the acquired titles "under an imprint of Amazon's New York publishing unit" under Larry Kirshbaum, who is now described as publisher of Amazon Publishing, East Coast Group, vaulting the company into the children's book market. Signaling larger intentions, the company says in the announcement "the acquisition creates the foundation for Amazon Publishing to further expand into picture books, chapter books and YA novels."

The deal allows Marshall Cavendish to focus on the K-12 textbook and assessment books business in the United States, expanding its school publishing business globally, and it certainly means that the door to Amazon is still open.


“We’re excited to acquire the Marshall Cavendish Children’s Books titles and expand our publishing business in this area,” said vp Amazon Publishing Jeff Belle in a statement. "We believe the children's book market segment presents a unique opportunity to innovate in both print and digital formats. And since many of these titles are not readily available as eBooks, we see a chance to connect a terrific group of authors and illustrators with more readers. We also see the potential for similar deals across other categories in the future."

Posted by World of the Written Word at 8:57 AM
Email ThisBlogThis!Share to TwitterShare to FacebookShare to Pinterest