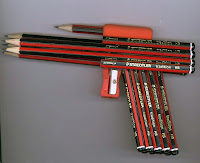 Yesterday, we went to a movie -- INCEPTION -- amazing!  Highly recommended.  The effects are mind-bending, as is the plot.  You will come away thinking deeply about reality, and what it is.

Somewhat appropriately, a friend sent me one of those internet posts that go around the world and past many uncomprehending computers -- but which in this case also called in one's sense of reality.

First, it introduced a new word. Paraprosdokian  It is so new, it is not in any dictionaries.  But it is in Wikipedia.  It is easier for me if I think of it as "paradoxian."

Anyway, here is an extract to the post, which will make you think about how follow-up sentences can surprise -- by their sheer paradoxicality ...

A paraprosdokian is a figure of speech in which the latter part of a sentence or phrase is surprising or unexpected in a way that causes the reader or listener to reframe or reinterpret the first part. It is frequently used for humorous or dramatic effect, sometimes producing an anticlimax

� I asked God for a bike, but I know God doesn't work that way. So I stole a bike and asked for forgiveness.

� Do not argue with an idiot. He will drag you down to his level and beat you with experience.

� I want to die peacefully in my sleep, like my grandfather. Not screaming and yelling like the passengers in his car.

And isn't my illustration of a pencil-gun appropriate?  The pencil is mightier than the gun, as they say.

It's an artwork another friend gave me.
Posted by World of the Written Word at 6:40 PM
Email ThisBlogThis!Share to TwitterShare to FacebookShare to Pinterest