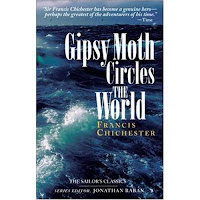 The boat that circled the world, created a sensation, and became the "heroine" of a bestselling book (1967) is up for sale -- for the bargain price of quarter of a million quid.

The name of the yacht was turned into a household phrase when Francis Chichester -- at the age of 65! --became the first man to make a solo circumnavigation of the globe.

Public interest burgeoned into wild enthusiasm over the nine month-circuit, with the result that quarter of a million people greeted the intrepid yachtsman on his return to Plymouth.  (That's a coincidence of numbers!)
Now the 16m (53ft) wooden ketch is being sold by her owners, the United Kingdom Sailing Academy.
All those interested should contact Sue Grant, of yacht brokers Berthon, who said there had been great interest.

"She has been restored to how she was at the time of the record. There are modern electronics but they are hidden behind the original control panel. After Sir Francis died in 1972 she was put in the Greenwich museum for some time and was then sold."

It is popularly believed that a good captain loves his ship, no matter how unlovely that vessel might be.  Not so Sir Francis.

"She is cantankerous and difficult and needs a crew of three," he famously quipped:  "a man to navigate, an elephant to move the tiller and a 3ft 6in chimpanzee with arms 8ft long to get about below and work the gear."
Posted by World of the Written Word at 8:49 AM
Email ThisBlogThis!Share to TwitterShare to FacebookShare to Pinterest