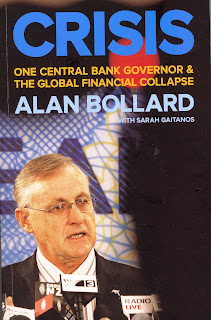 "I told those assembled that we thought the crisis had caused the biggest destruction of global wealth -- albeit some unrealised -- in human history."
-- Alan Bollard, Governor of the Reserve Bank of New Zealand, remembering a speech made at a summit, 27 February 2009.
New Zealand is a small country -- so small that membership of the great G-20 Group is impossible, and during G-20 summits our political and economic leaders are dependent on Australia for the to-and-fro of the state of the financial world. It was not impossible, however, for the Governor of our Reserve Bank to observe the unfolding of the near total collapse of the world economy, as Alan Bollard confides in this 203-page account of what he experienced during that tsunami time in modern history.

There was a Launch.  I went to it.  It was in the museum of the Reserve Bank, complete with interactive displays.

I wore the nearest approximation thereof in my wardrobe, and have never seen more Suits at once in my life.  For a person who knows nothing about economic science (and wouldn't even know the difference between the Reserve Bank and the Treasury) it could have been intimidating.  I enjoyed myself mightily, however -- which was not a guarantee of understanding the book, believe me.  Nevertheless, I bought it.  And coaxed the Governor into signing it.

And I found it unput-down-able.  It is an amazing book, making headlines that were terrifying and unsettling at the time comprehensible now.  It is also remarkably intimate.  Co-writer Sarah Gaitanos, orchestrator of the book ("There's a fascinating book in there," she informed the Governor after switching off the digital recorder), is a gifted oral historian who encouraged Alan Bollard to relax and "speak" in his most confiding, most humanly understandable, voice.  Reading it, I found it surprisingly easy to identify with this remote figure, and see the crisis in a different way.

Because of this unexpected empathy, not just does the reader learn about the horrifying hour-to-hour unfolding of the economic crisis, but is given a historic insight into the daily life of one of the front-seat observers.  Thus, we are given the most unusual privilege of knowing that Alan Bollard sneaked away from a particularly taxing summit in Auckland -- to watch cricket.

"I admit to an ulterior motive," he confesses.  "Back in Wellington I headed for the stadium where I was just in time to catch the end of the New Zealand 20:20 cricket game against India."  New Zealand (he says "we") "improbably won off the last ball of the match."

He freely goes on to say that it "was a great emotional release."

Would Greenspan or Summers be as candid?

Somehow, I doubt it.  This book is unique.  American readers, I highly recommend that you buy this book and take advantage of a unique peephole into recent history.  The book was published by Auckland University Press:
Posted by World of the Written Word at 6:54 PM
Email ThisBlogThis!Share to TwitterShare to FacebookShare to Pinterest

Accolades to Sarah Gaitanos who is such a hard-working high-achieving writer for her work on this book which I haven't as yet read. Thanks for this posting Joan.

I strongly recommend it, Maggie. You'll enjoy it -- even if, like me, you skip the graphs!

Oh yes, graphs, I will most certainly skip the graphs. The only graph-like thing I can follow is the Dompost crossword.

I think they were there so the economists had something to look at. :)