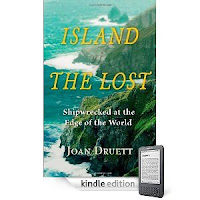 For some time now, I have been watching the sales the kindle e-book edition of Island of the Lost on amazon.com with intrigued attention.  It is selling well, which is probably no surprise -- though the Allen & Unwin paperback is still in print, and the book is still drawing a great deal of attention, the original New York publishers, Algonquin, don't even have it featured in their catalogue.
Evidently, it is not considered worth the cost of producing a print edition, merely to compete with the electronic book.  This is tough news for booksellers, if so.  And -- if so -- is it justified?
Perhaps so. At the same time, I have made a comparison study of Eric Jay Dolin's fascinating account of the impact of the fur trade on early America.
Fur, Fortune and Empire is attracting a lot of interest, including rave reviews from prestigious papers, and has been doing very well.  By contrast to Island of the Lost, which was published three years ago, Dolin's book was launched just a couple of months back.  Naturally, the hardback sales have dominated.  To my surprise, however, the kindle sales have gradually been catching up, and today I see that they have taken the lead.
Bad news for bookstores, indeed.  And authors have to do a lot of rethinking, too.
Posted by World of the Written Word at 9:37 AM
Email ThisBlogThis!Share to TwitterShare to FacebookShare to Pinterest

I've recently been approached to turn my novel, The Occidentals, into an e-book. I'm in the process of retyping it, since the edited disks are no longer available. Ten years down the track, I can do a little revision, too! I was interested to see that Kindle sales are broken down into useful categories. Just knowing what a book ranks out of all books on Amazon is next to useless (unless you wrote Twilight or Eat Pray Love).

Wonderful news that The Occidentals will see the light again -- courtesy of the ether! All that re-keying must be a challenge, though. Agree about the sub-categories on amazon -- very useful indeed.