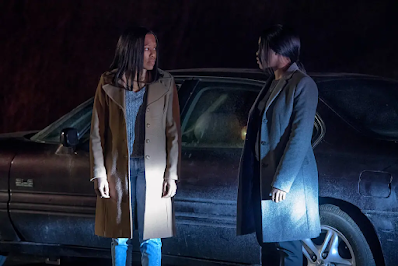 Have I never been to New Jersey?  Surely I have.  I lived three years in New York, and visited on book business many times.  But nothing about this depiction of Jersey City rang a bell.  And I certainly don't remember the F-bomb being used as idly and frequently as the word "and" and losing all impact and meaning in the process.  At first faintly offensive, the dialogue became tedious.

And what a scene the series depicts. Black kids selling drugs in the gutters.  White kids selling their bodies for drugs. Crooked cops. Violence in the police station, violence in the streets. Darkness in the extreme, lightened only by occasional glimpses of the Statue of Liberty.

This series is not a mystery.  Right at the start, you learn exactly what happened.  A white cop driving through a rundown park gets a phone call to say his wife is in hospital. While he is panicking and distracted he slams into something, and skids in the snow.  He gets out of the car, to see that he hit a bike.  There is also a lot of blood. Because of the force of the impact the rider of the bike was thrown into the air, and slammed into a deep ditch.

Actually, there is a mystery here -- why didn't the cop do what most of us would do, and simply call for an ambulance?  That is never explained.  You just have to take it on board. Because instead of calling for an ambulance he phones the other cops in his team.  These are effective (if foul-mouthed) drug-busters, partly because the sergeant -- who is very much in charge -- has an agreement with the crippled Black guy who runs the drug trade in his precinct.  As I said, he is a control freak, and as crooked as my elbow, but doing a reasonable job of keeping the drug trade within limits.

This sergeant sums up the scene, says the kid is dead, and because that kid is Black, it is not a good idea to call it in.  So they all drive away.

But the kid is not dead.  Instead, he lies there for 12 hours before a couple of dog-walkers find him.  He is rushed to hospital, and his parents notified.  And at this stage the parents' characters are strongly drawn, but never evolve from then on.  Cardboard characters, but starkly painted.  Both belong to a Gospel church that is fundamental in philosophy.  (Note I do not say "Christian." More about that later.)  Dad is incredibly hardworking, doing double shifts in a slaughterhouse so he can keep up the mortgage payments on his house. Having a house (which we are told his hugely unusual for a Black man) is his great pride, though his long hours did mean that Mom, who doted on their son, was in charge of just about the total upbringing of the boy.

Doting Mom agitates over the hospital bed, and collapses into emotional bits when the boy dies.  And she wants REVENGE.  The vindictiveness is truly awful.  Believe me, it is cringe-making.

However, a young Black lawyer with a grubby past feels exactly the same. In her eyes, as in Mom's, this accident is a HATE CRIME that must be avenged in full.  A hit-and-run that deserves the ultimate punishment.  Mom even procures a gun to carry out the execution herself.  And this is where the series becomes repetitive and boring, because their vengeful, vindictive attitude never wavers.

When the church backs Mom up, the series becomes truly disturbing.  This is the creed of retaliation found in parts of the Old Testament -- "The righteous shall rejoice when he seeth the vengeance: he shall wash his feet in the blood of the wicked." (Psalms 58:10).  It is NOT the creed of forgiveness that men like Christ preached. "Then Peter came to Jesus and asked, 'Lord, how many times shall I forgive my brother or sister who sins against me? Up to seven times?' Jesus answered, 'I tell you, not seven times, but seventy-seven times.' " (Matthew 18: 21-22.)

Has America forgotten how to forgive?  If so -- and this series certainly indicates that this is so -- the future looks grim indeed.

The dead kid's uncle, Biblically named Seth, is an airforce man who had served in both Iraq and Afghanistan. At one stage he says, "This is not my country."

And that, indeed, sums up the message of this very one-sided story.

Posted by World of the Written Word at 10:36 AM
Email ThisBlogThis!Share to TwitterShare to FacebookShare to Pinterest