What it is like to wear a head scarf in Wellington 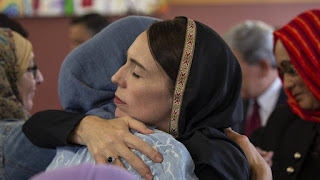 Following the wonderful example of our prime minister, girls and women were encouraged to wear head scarves on this day, Friday 22 March, the one-week anniversary of the atrocity in Christchurch, where 50 Muslim worshipers were gunned down while at prayer.

As the appeal ran:


New Zealanders of all religions are being encouraged to wear headscarves on Friday to show their support for the Muslim community.
The #headscarfforharmony movement will take place on Friday March 22.
It aims to support and acknowledge the pain the Muslim community is suffering, and the grief New Zealanders share in the midst of tragedy.
"We want to show our love and support and grieve for the loss of 50 mothers, fathers, children, colleagues and friends after last Friday's terrorist attack in Christchurch," the group says.
While I do not particularly like women being dressed in ritual clothing, considering it a form of subjugation, I do wear a head scarf in Muslim countries, as a courtesy to their local customs.
So, today, I followed the encouragement, and wore a head scarf during the noon rush in Wellington, walking down the Terrace, through Parliament grounds, and up Molesworth Street, passing the entrances of many major businesses and lots of trendy cafes.  The streets were crowded.
And, for me, it was a curious experience.
Along the Terrace, people avoided eye contact.  Going through Parliament grounds,  I was shocked when a man gave me a two-finger salute, with a silent snarl.
It was not the first time.  Walking up Molesworth Street, it happened again.  Twice.  Both of these men who displayed such contempt of what I was wearing were white, and in late middle age.
Then I saw a policeman.  He hesitated when he saw me, looked me up and down, and then walked on without a word.  Crossing zebra crossings, I felt more worried than usual that the oncoming car wouldn't stop to let me through.
I saw two other Kiwi women in head scarves.  Like me, they had their heads down, and looked intimidated.
Finally, someone smiled.  It was a young Indian woman with a pushchair, and it was as if the sun had come out behind a cloud.
It was a tiny glimpse into what daily life is like for an Muslim woman who is wearing traditional dress.  It was the first time I realized what courage it takes to go out wearing such a strong statement of belief and custom.
I have no idea if the men who two-fingered me were Kiwis -- the city is full of tourists.  Nonetheless, it was very troubling.  All I can suggest is that schools should have "head scarf days" for girls and "skullcap days" for boys, maybe just once a term.  Just to see how they come out of the experience.
Posted by World of the Written Word at 6:29 PM
Email ThisBlogThis!Share to TwitterShare to FacebookShare to Pinterest