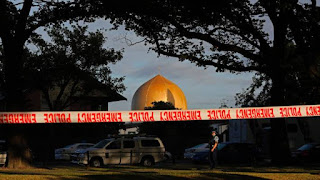 Gifts and food have been delivered to mosques, Islam centers, hospital staff, and police.  Vigils have been held where thousands have attended.  Flowers have been placed, and candles lit.  Visas for relatives flooding in from all over the world have been expedited, and money for funerals has been provided.  Online donations have reached in the millions.

One symbol of this huge outpouring of love, sympathy and grief is that the two mosques that were the scene of this outrage will be ready for prayers tomorrow.

Bloodstained carpets have been replaced, windows re-glazed, bullet holes filled and walls repainted.  And it has been done by Kiwis who have donated their skills and materials.

According to the news report:  Christchurch businesses have rallied to ensure that the mosque at the centre of New Zealand's worst mass shooting is open to the Muslim community a week after the terror attack.


A gunman entered the Masjid Al Noor on Deans Ave about 1.40pm last Friday and shot dead 42 people as they prayed. The building was left riddled with bulletholes and stained with blood.
The police finished their investigation at the scene on Tuesday night. Since then, carpet layers, plasterers, glaziers, painters, builders and gardeners have been working to clean and repair the mosque so the Muslim community can return to pray there on Friday afternoon.
Friday is considered a sacred day for Muslims when they come together to pray as a community.
Stuff contacted businesses involved in the clean-up, but most declined to comment because they didn't want the publicity.  The businessman said he was approached by a "government agency" to carry out the work and had been told it needed to be completed by Thursday night so Friday prayers could be held at the mosque.
"It's not about our business, it's about trying to restore some normality back into the town. To help is a really good feeling."


Posted by World of the Written Word at 1:15 PM
Email ThisBlogThis!Share to TwitterShare to FacebookShare to Pinterest