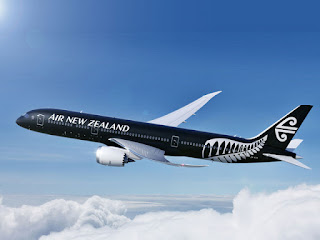 
For the fifth consecutive year, Air New Zealand has been named the “Airline of the Year” in the U.S. by AirlineRatings.com. Various factors were taken into consideration, but the carriers record-breaking financial performance helped it to beat out competitors. Despite earnings before taxes falling to $527 million in 2017 from $663 million in 2016, the airline still experienced its second-most highest earnings in the company’s history.
In addition to profits, Air New Zealand also took the top spot thanks to in-flight innovations, environmental leadership, safety, and a young fleet of aircrafts. It also doesn’t hurt that New Zealand has been experiencing a tourism boom. In the last year, 3.7 million international tourists have visited the island nation so far this year, up 9% from 2016.
Air New Zealand was also named as the airline with the Best Premium Economy. Singapore Airlines won for Best First Class experience, Virgin Australia won for Best Business Class experience, and Korean Air won for Best Economy Class.

The 10 best airlines in the world

AirlineRatings.com also identified the top 10 airlines in the world. After Air New Zealand, Qantas and Singapore airlines rounded out the top three. The rest of the list includes in their respective rank: Virgin Australia, Virgin Atlantic, Etihad Airways, All Nippon Airways, Korean Air, Cathay Pacific and Japan Airlines.
In order to make this list, airlines must achieve a seven-star safety rating and demonstrate leadership in innovation for passenger comfort.
By now you’ve noticed that no U.S. carriers made the list, which is disappointing, but not surprising. U.S. carriers also did not rank on last year’s list.
Perhaps the focus on “passenger comfort” is what keeps legacy airlines like American, Delta, and United from getting mentioned. U.S. carriers have made many changes with their economy class seats in the past two years: They shrunk the size of seats and positioned  them closer together. American Airlines announced that their new 737-Max jet planes would feature three rows of economy seats with a pitch (the distance between seats) of 29 inches. The current pitch of similar-sized Boeing 737-800 jets is 31 inches.
In July 2017, United Airlines also announced that it was adding an extra seat in every row in economy class on their Boeing 777 aircraft. In other words, passengers would pay the same price for a ticket, but have less space.
These cutbacks almost certainly impacted the ranking of U.S. carriers.
“We are looking for leadership and airlines that innovate to make a real difference to the passenger experience, particularly in economy class,” said the AirlineRatings.com judging team.
Judges also took passenger feedback on their website into consideration. Based on what we know about American consumers, they probably didn’t have nice things to say about the U.S. carriers.

Posted by World of the Written Word at 9:41 AM
Email ThisBlogThis!Share to TwitterShare to FacebookShare to Pinterest