The Witch of Wall Street 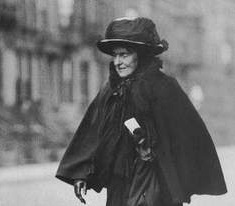 Yes, it is no less than Hetty Green, born in New Bedford in its whaling heyday, heir of a fortune made mostly from whaling, and known by a number of nicknames -- America's First Female Tycoon, The World's Greatest Miser, The Queen of Skinflints -- but "The Witch of Wall Street" is the one that has stuck.

Did she merit her miserly reputation? It seems so, but there is much to admired.  She was a financial genius, turning the $7,500,000 she inherited at the age of thirty until an estate worth up to two million by the time she died, in 1916.

However, as her short biography on the New Bedford Whaling Museum website describes, it is due to her son, Colonel Green, that the Charles W Morgan, the last of the wooden whaling ships, has survived.

There is a fuller biography in the latest Smithsonian, which is well worth reading for more about this truly fascinating woman.


Posted by World of the Written Word at 1:58 PM
Email ThisBlogThis!Share to TwitterShare to FacebookShare to Pinterest