Film capital of the country now -- soon the world? 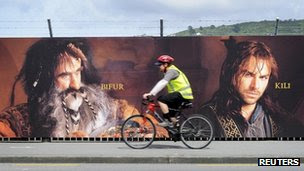 The Hobbit, Tintin, and Rise of the Planet Apes have helped bring in film industry revenues of almost $830 million, just in the year to April 2012. That's 67% up on the figures for the previous year.

Film New Zealand CEO Gisella Carr said that a cluster of companies in Miramar (a rather hilly suburb, with rather nice views of the city and the harbor) had contributed largely to the result.

We can thank Weta Workshops for a large part of it, too. A Statistics NZ survey concluded that Wellington was a leader in digital graphics, animation and effects.  This aspect of the business generated $427 million in revenue.

Carr said that Weta's continued ability to pull in major American production had been a major factor.

"We're seeing a significant dominance of Weta Digital in visual effects and their outstanding global reputation," she said.  They are not alone, though -- there are now 789 post-production companies in Wellington.

There is also a significant taxpayer input, the New Zealand Film Commission's large-budget providing rebates of 15% for films made in New Zealand, when at least $15 million is spent within the country by the film company.

Last month Sir Peter Jackson's first instalment of The Hobbit brought in more than one billion greenbacks at the global box officer, the 15th film in history to do so.
Posted by World of the Written Word at 10:01 AM
Email ThisBlogThis!Share to TwitterShare to FacebookShare to Pinterest