Dream made true for researchers in American history 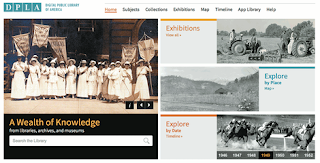 The Digital Public Library of America, to be launched on April 18, is a project to make the holdings of America’s research libraries, archives, and museums available to all Americans—and eventually to everyone in the world—online and free of charge.


“Long-awaited network will open access to museum and library collections nationwide”
As the press release explains:

“The Digital Public Library of America is a beautiful idea. Take the physical-to-digital ambition of Google Books and wed it to the civic spirit of the US public library system, providing a centralized portal to a decentralized network of digital media from libraries, museums, universities, archives, and other local, regional, and national collections. Framed in this way, it all seems so logical, so proper, so clear — everything the internet as a public commons promised to be. Surely the messy reality of copyright law, limited local budgets, or the cat-herding that goes into any grand alliance of independent institutions was bound to foul it up somewhere.”
“The DPLA is in fact real, and will hold a launch event on April 18 at the Boston Public Library. In an essay in The New York Review of Books, Harvard University Librarian Robert Darnton describes how the DPLA’s organizers overcame some of that messy reality to get the new nonprofit off the ground, and some of the obstacles (read: copyright) with which it’s still grappling. (As a historian of the 18th century, Darnton also unsurprisingly places the DPLA within the overlapping traditions of the Enlightenment and the American Revolution.)”
“Unlike Google Books, the DPLA doesn’t hoover up institutions’ documents to be stored on its own servers. Its primary goal is to support coordinate scanning efforts by each of its partner institutions, and to act as a central search engine and metadata repository. Most of these libraries and museums have been slowly scanning and cataloguing their collections for years; the DPLA helps make those materials aggregatable and interoperable. At least initially, it’s not nearly as focused on printed books as Google has been, but rather gathers an eclectic mix of texts, photos, data, and art, especially rare documents. It also provides a sophisticated frontend portal for discovery and research.”


Posted by World of the Written Word at 9:17 AM
Email ThisBlogThis!Share to TwitterShare to FacebookShare to Pinterest