FIRST EDITION COLLECTION TO BE SOLD 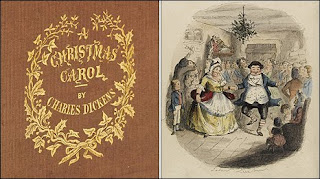 Well, it seems it is Christmas Carol remembrance moment.  According to the BBC, a first edition of the story, complete with an inscription by the author, Charles Dickens, forms part of a magnificent collection of first editions that is going under the hammer.

Other features of the collection are first editions of Mary Shelley's Frankenstein, and Jane Austen's Pride and Prejudice.  There is a collection of TS Eliot poems, also with a personal inscription (to none other than Virginia Woolf), a copy of Wilkie Collins's Moonstone in its original cloth, and Samuel Beckett's Murphy in its original DJ.  Charles Darwin, Geoffrey Chaucer and John Milton are other highlights.

Sotheby's English literature specialist, Peter Selley, confides that he felt "rather punch drunk" when he scanned the brilliant array.  "There is not just one highlight -- there is one highlight after another.  It is the finest collection I am ever likely to see in my lifetime."

Obviously, it is an eclectic array.  It does seem a pity, however, that it is going to be broken up.

Offered in a series of lots, the collection is expected to fetch as much as fifteen million pounds.
Posted by World of the Written Word at 10:20 AM
Email ThisBlogThis!Share to TwitterShare to FacebookShare to Pinterest