A special edition of Haaretz, to mark Israel's book week.

It is called THE SHADOW OVER ISRAEL, and is introduced by a heartfelt poem, The Moment. 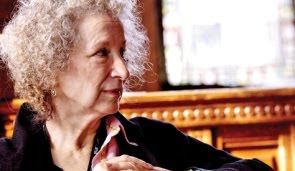 Recently, she then says, I was in Israel.  The Israelis I met could not have been more welcoming.  I saw many impressive accomplishments and creative projects, and talked with many different people.  The sun was shining, the waves waving, the flowers were in bloom. Tourists jogged along the beach at Tel Aviv as if everything was normal.
But, there was the Shadow.  Why was everything trembling a little, like a mirage?  Was it like that moment before a tsunami when the birds fly to the treetops and the animals head for the hills because they can feel it coming?
"Every morning I wake up in fear," someone told me. '"hat's just self-pity, to excuse what's happening," said someone else.  Of course, fear and self-pity can both be real.  But by "what's happening," they meant the Shadow.
I'd been told ahead of time that Israelis would try to cover up the Shadow, but instead they talked about it non-stop.  Two minutes into any conversation, the Shadow would appear.  It's not called the Shadow, it's called "the situation." It haunts everything ...
Posted by World of the Written Word at 9:46 AM
Email ThisBlogThis!Share to TwitterShare to FacebookShare to Pinterest