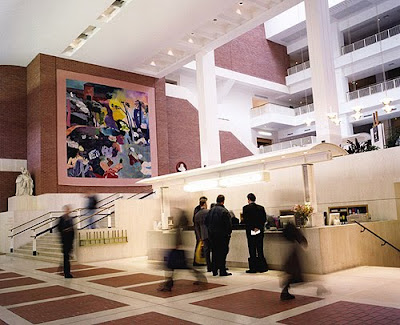 Over August and September, Ron and I completed a lot of primary research at the British Library in London, a new building with many new and interesting features.
It is like a huge concourse, with winding stairs and mezzanine floors. (Actually, rather appropriate, considering that the Library is sited between two major railroad stations.) The foyer is huge, and has a visual impact that forces the visitor to look up, and up.
Everywhere people perch with their laptops, on steps, on benches, or at the many little tables scattered around. Many of them have paper coffee cups and portable lunches. They sit in silent groups, hunched over their keyboards.
Why? It takes a few moments to realize that the whole building has free Wi-Fi, as they call wireless internet access. To all appearances, the people are catching up on their email. The library perhaps hopes that they are scanning the much-touted digital library, instead.
Apart from a central glass column (surrounded by an empty moat, apparently) which is walled from within with shelves of large books, spines outward (how do the librarians inside the column know which book is which, I wonder?), the only books in sight are in the library shop.
It is a relief to an oldfashioned researcher to successfully apply for a library card, and go 'way upstairs to one of the unobtrusive reading rooms, progress through security, apply for reading material, and get down to some oldfashioned research.
Getting hold of documentary material is interesting, though. It is vital to know the shelfmark (having found it out by consulting many books on the subject until one is found that cites the shelfmark in a footnote), as the massive catalogue still needs work in that respect.
Documents and charts, I found, have just a 70-minute waiting time for delivery. Most books take forty-eight hours to arrive. Why? Because space is so limited, most have to be stored offsite. Images of that huge concourse do tend to haunt one while waiting ...
One also wonders if this is where the National Library of New Zealand is heading, the stated direction being digital, except that the plan includes providing expensive-to-maintain, taxpayer funded computers, so clients won't need to bring along their laptops.
Jim Traue, dogged campaigner for the retention of facilities for good oldfashioned research, has published a booklet of his various opinion pieces on the topic, A Library for the Nation or another Wellington tourist attraction? It is obtainable from the author at 16B Hadfield Terrace, Kelburn, Wellington 6012, price $5, p&p free.
Posted by World of the Written Word at 9:35 AM
Email ThisBlogThis!Share to TwitterShare to FacebookShare to Pinterest

What a fascinating taste of the library! Thanks!!

You are most welcome to my thoughts! And many thanks for the comment. Another tip -- the British Museum holdings of charts and manuscript material were transferred to the British Library complete with their shelfmarks. So the old BM shelfmarks still work. Once I found this out, it made the ordering process so very much easier. Another bonus is that once you have a reader's ticket, you can order material online. So, if you plan well ahead, you can cope with that 48-hour wait for books.

I've heard the British Library, even as it was being built, was already too small for the materials it was going to need to store.

My university library was the same in its waiting times: I just assumed all copyright libraries must be the same. We used to imagine an intrepid librarian going off into the stacks with sleeping bag, torch and trail of breadcrumbs to find our books over the course of a couple of days.

I love the image, Amber! Maybe the intrepid librarian could be accompanied by a train of bearers, and the occasional impatient researcher, and they could set up camp in the stacks.

I can just hear my late mother-in-law throwing a fit that it would take 48 hours to get material! And since she was rather vocal, you probably would have heard her all through the concorse!

Thanks for sharing a bit in your adventures. I am always fascinated to find out where books end up. Here in the US, many libraries are sending books to the Philipines or Manilla for storage. Horrid, damp places for books and giving one a lot longer wait than 48 hours!

I remember that years ago I was trying to research Rajah Brooke of Borneo. Impossible -- because all the records had fallen foul of mold, damp, insects, and war. Manilla? Bizarre!