Ovation of the Seas revises itinerary 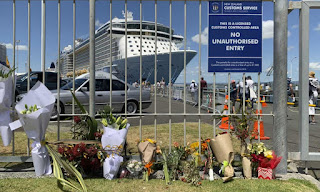 The cruise ship is still in Tauranga, and will not leave until tomorrow morning, 11 December.


Passengers aboard the Ovation of the Seas report a sombre and "surreal" atmosphere on board the ship following yesterday's tragic shore excursion to White Island.
Guests from the Royal Caribbean cruise ship were caught up in an eruption on the volcanic White Island at around 2.11pm yesterday.
Of the 47 people on the island during the explosion 38 were cruise passengers from the Ovation.
The 4918-passenger cruise ship has stayed an extra night in the Port of Tauranga, while the situation continues to develop. However, according to the port authority the ship will now remain in dock until Wednesday morning, at the earliest.
In a statement from Tauranga City Council and Tourism Bay of Plenty the Ovation was given a new departure time for Tuesday evening, with passengers being allowed to disembark from 10am this morning.
However this was later revised by the Port of Tauranga, which said the ship would be staying at least another night "due to police operational matters."
The current provisional departure time is for 7.15 on Wednesday morning.
"I ask our generous community to show aroha and give support to the cruise passengers in our city today," said Tourism Bay of Plenty Chief Executive Kristin Dunne.
A Royal Caribbean Spokesperson could not confirm this departure time, saying that they were revising the ships itinerary to help passengers and the families affected by the tragedy.
"We are working to help our guests and the authorities in the aftermath of this tragedy in any way we can."
"We are communicating with our guests and their families. We're making sure they are taken care of in terms of medical help, counselling, accommodations, and transport. Our hearts go out to them, and we want to be as supportive as we can."

It is unclear what impact this will have on the sailing, which was scheduled to be at sea today.
White Island has been a popular day-trip destination for both tourists and cruise passengers because of its dramatic volcanic activity.
However, the future of tourism on Whakaari is in doubt.
Last Tuesday GeoNet warned of a heightened level of volcanic activity but that it did "not pose a direct hazard to visitors".
As well as Royal Caribbean, ships from Azamara and Celebrity cruises have previously offered excursion to the island.
Princess Cruises - which sails three ships via the Port of Tauranga - offers scenic helicopter overflights to White Island, though passengers do not land on the island.
Operator White Island Tours which offers day trips to "explore New Zealand's most active volcano" has taken its website down following the emergency.
"It was one of those things you just stand there in shock. What are the chances this happens on your holiday," passenger Venessa Lugo, 24, told the Herald.
Lugo and her partner opted to go on an excursion to Hobbiton yesterday, instead of the White Island tour.
Passengers were informed of the disaster by an announcement from the ship's captain this morning.
"He said there was a tragedy that occurred and that we had missing passengers and crew from the volcano," said Debbie Shapirl, who is cruising with family.
Donna Field a reporter with ABC news who was holidaying on the Ovation tweeted a picture of the ship's upper deck, saying : "Bit surreal onboard this morning."
Locals have been leaving flowers and tributes at the Port of Tauranga, where the Ovation is still berthed.
The Ovation is due to conclude its sailing in Sydney on Monday 16 December.
At full capacity she has just under 5000 passengers and 1500 staff, making her the largest Cruise ship ever to visit New Zealand.
Family members concerned about relatives on board Ovation of the Seas can contact the Royal Caribbean cruise line on these numbers:Australia – 1300-026-240New Zealand – 0800-002141USA – 800 829 4050Germany 0800-180-0885UK 0-800-014-8339Mexico 01-800-681-5336China 400-120-3534Japan 0800-170-6282Singapore 65-31582855
Posted by World of the Written Word at 8:09 PM
Email ThisBlogThis!Share to TwitterShare to FacebookShare to Pinterest