New edition of ISLAND OF THE LOST 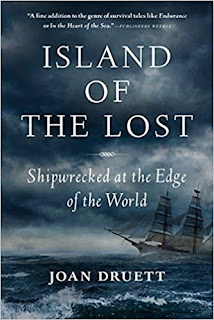 Twelve years after first publication (in 2007), Island of the Lost is still hovering in the top seller list for books about the sea, including a listing in Amazon's Most Sold Books.  So Algonquin, the publishers, have decided to produce a new print edition -- to catch, as they say, the young people who missed the first marketing.

It comes out in August.

Meantime, here is one of the 540 reviews, rated the most helpful by readers.


I am an engineer and in a position to appreciate how hard the tasks accomplished by these shipwrecked men were. Especially impressive was Raynal, the Frenchman from the Grafton. I am not sure I could even duplicate his bird cage, much less his concrete chimney or his handmade nails or his new boat made out of the old shipwreck. I read in the epilogue that original account published of the Grafton shipwreck by the survivors ignited a craze at the time to steer away from technology and get back to first principles like gardening, and shipmaking. I feel the same way today.I have read several of these 19th century adventure books, like Ernest Shackelton's polar voyage and George De Long's experience on the USS Jeanette wreck. This ranks right up there among the best of these.It contrasts the experience of two sets of castaways on the same deserted island in the Southern Ocean south of Australia. The island is forbidding in the extreme with terrible year-round weather, high craggy cliffs, low wind-twisted trees and scrub brush, and a pestilence of biting black flies and blue-bottle flies.The first set of shipwreck survivors provides the Shackelton example of both moral and physical leadership leading to a 100% survival rate for all the castaways of the Grafton. The second set of castaways resembles the "Lord of the Flies". The second set of castaways from the Invercauld has about a 10% survival rate and experience a wide range of the worst in human behavior.My impression is that both sets of castaways carried this great and horrible experience with them for the rest of their lives. The Grafton castaways learns timeless lessons about leadership and courage, while the Invercauld crew learns fear and loathing and recrimination that likely haunted them for the rest of their lives.
Posted by World of the Written Word at 8:44 AM
Email ThisBlogThis!Share to TwitterShare to FacebookShare to Pinterest