A cruise in April to a marine reserve in New Caledonia has been called off after thousands of people signed a petition to keep the area untouched.
Last year, the French company Ponant applied to enter the Chesterfield Islands area once a year with a ship carrying 180 passengers.
Although the New Caledonian government had not yet made a decision, the cruise ship company said it had suspended the project in order to find the time for more discussions.
Starting in Auckland, the 14-day cruise was set to call at the Chesterfield Islands, which the company describes as an archipelago lost in the Coral Sea teeming with sea birds and sea turtles. 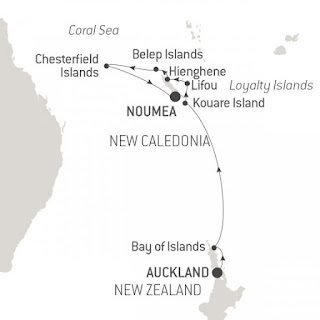 The head of Ponant said an alternative stop would be sought.
The Ponant website, however, still offers seats on the La Laperouse and lists the Chesterfield Islands as part of the itinerary.
In October, Ponant, which runs luxury cruises, was fined in New Zealand for running a ship aground in a protected area of New Zealand in 2017.

îles Chesterfield, an uninhabited French archipelago, is located in the Coral Sea, 550 km northwest of Grande Terre, the main island of New Caledonia.   First discovered by Lt. Henry Lidgbird Ball in HMS Supply on the way from Sydney to Batavia (modern day Jakarta) in 1790, , the group has a colorful history, studded by many shipwrecks.  A set of reefs that were to become notorious were first recorded by Captain Matthew Boyd of the East Indiaman Bellona in February 1793,  when he was heading to China after delivering convicts to New South Wales. The following June, William Wright Bampton became embayed for five days at the north end of Chesterfield Reefs in the Indiaman Shah Hormuzeer, together with Mathew Bowes Alt in the whaler Chesterfield.
Hence the names given to the various reefs and shoals.
Many of the ships that were lost there were whalers, as the archipelago is a wintering ground for both humpback and sperm whales.
One was the American whaler Hope, Captain Leonard Gifford, who carried his wife, Lucy Ann, on a long miserable, six-year voyage.  In July 1863 he left her on Norfolk Island, along with their two little children (both born on voyage), assuring her that he was off to whale in the Coral Sea, and would be back before long.  His ship, however, came to grief on the Bampton Shoal.  Leonard and his men survived, and sailed to Australia in a procession of small whaleboats.  It delayed matters somewhat, however -- Leonard did not turn up to collect his wife until September 1864.
So perhaps canceling the cruise is a good idea for several reasons, one being the natural hazards of the area. 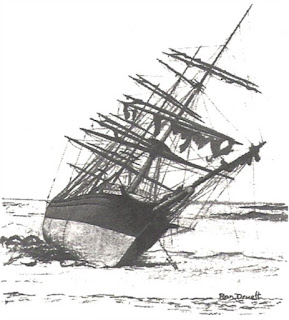 Posted by World of the Written Word at 10:32 AM
Email ThisBlogThis!Share to TwitterShare to FacebookShare to Pinterest

Wonderful article and statement. Keeping as many as possible knowledgeable about the danger to the environment is one key for the future of maritime preservation.