First woman in the Antarctic 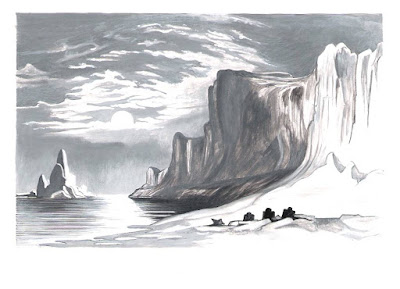 The BBC reports the presence of an unknown number of corpses, deep in Antarctic ice.  Most, of course, are of scientists and explorers, and all of them, naturally, are men.

At Livingston Island, among the South Shetlands off the Antarctic Peninsula, a human skull and femur have been lying near the shore for 175 years. They are the oldest human remains ever found in Antarctica.

The bones were discovered on the beach in the 1980s. Chilean researchers found that they belonged to a woman who died when she was about 21 years old. She was an indigenous person from southern Chile, 1,000km (620 miles) away.  Analysis of the bones suggested that she died between 1819 and 1825. The earlier end of that range would put her among the very first people to have been in Antarctica.

So, how did she get there?  That is the question.  Obviously, it was not by canoe.  She was carried by some European or American shipmaster, perhaps as a guide and navigator, just as Captain James Cook carried Tupaia, the Tahitian navigator, back in 1769, and Lewis and Clark recruited Sacagawea, a Lemhi Shoshone woman, in 1804.

So, who was that captain?  There are several possibilities.

One is Captain William Smith of Blyth, Northumberland, an experienced mariner who had learned his trade in the tough Greenland whalefishery.  In 1819, when he was in command of the British merchant brig Williams, he took an unusual route from Buenos Aires to his destination, Valparaiso, Chile, by sailing south of Cape Horn.  On 19 February, he sighted Williams Point, the northeast extremity of Livingston Island. Thus Livingston Island became the first land ever discovered south of the 60th southern latitude. Smith revisited the South Shetlands, landed on King George Island on 16 October 1819, and claimed possession for Britain. 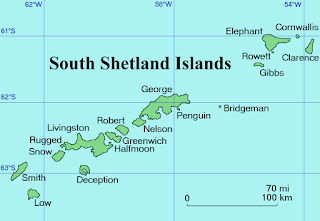 And then there is Captain Joaquín de Toledo y Parra, who was in command of  the Spanish Navy ship San Telmo, which sank in September 1819 whilst trying to go through the Drake Passage. Parts of her presumed wreckage were found months later by sealers on the north coast of Livingston Island. 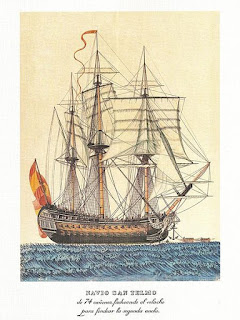 The 644 officers, soldiers and seamen (and perhaps one American-Indian woman) lost on board the San Telmo were the first known people to die in Antarctica, as parts of her wreckage were found months later by the early sealers visiting Livingston Island. Indeed, if somebody of the San Telmo survived to set foot there they would have been the first known person in history to reach Antarctica.
San Telmo Island off the north coast of Livingston Island is named after the ship.

And then there is Edward Bransfield was born in Ballinacurra, County Cork, Ireland, about 1785.  At the age of 18 he was working on his father's fishing sloop when a British Navy press gang swooped down.  Being thrust into the rough lower quarters of a Royal Navy ship could have broken his spirit, but instead he thrived.  Somewhat poetically, one of his messmates on his first berth,  the 110-gun first rate ship of the line HMS Ville de Paris, was 12-year-old William Edward Parry, who also became a noted Polar explorer.  Bransfield was rated as an able seaman in 1805 and was appointed to the 110-gun first rate HMS Royal Sovereign (which had taken part in the battle of Trafalgar in 1805); he was promoted in 1806 to able seaman, then 2nd master's mate in 1808, midshipman in 1808, clerk in 1809, and midshipman again in 1811. By 1812 he had achieved the rank of second master, and in the same year he was made acting master on HMS Goldfinch, a 10-gun Cherokee-class brig-sloop.
Between the years 1814 and 1816, he served briefly, as sailing master on many fifth rate ships. On 21 February 1816, he was appointed master of the 50-gun fourth rate HMS Severn, leading it in the Bombardment of Algiers.
During September 1817, he was appointed master of HMS Andromache under the command of Captain W H Shirreff. It was during this tour of duty that he was posted to the Royal Navy's new Pacific Squadron off Valparaíso in Chile.  While there, the Williams arrived, along with the news of William Smith's discovery, and Bransfield's captain, William Shirreff, decided that someone should make a proper chart of the islands.  So he  chartered the brig, put Bransfield in command, and sent him south.  Did Edward take a local woman with him?  As a guide?
But, at this stage, there are other possibilities -- because the islands teemed with seals, and seal fur was very valuable at the time. 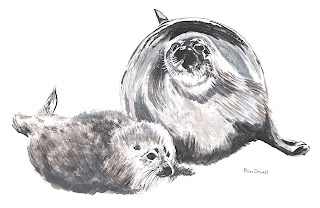 The first sealing ship to operate in the area was the brig Espirito Santo, chartered by British merchants in Buenos Aires. The ship arrived at Rugged Island off Livingston Island, where its British crew landed on Christmas Day 1819, and claimed the islands for King George III. A narrative of the events was published by the brig's master, Joseph Herring, in the July 1820 edition of the Imperial Magazine.

Then came the American brig Hersilia, commanded by Captain James Sheffield (with second mate Nathaniel Palmer), the first US sealer in the South Shetlands. 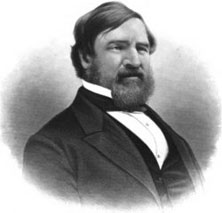 Palmer, the son of a Stonington, Connecticut, shipwright, started off in the coastal shipping trade, and perhaps would have had an ordinary seafaring life if he had not joined Sheffield's expedition.  Sealing was an awful business, rough and hard as well as violent and grisly, but it must have suited him, because the following year, at the age of just twenty, he was put in command of a sloop, Hero, in a sealing expedition headed by Benjamin Pendleton (a man to become famous in the Australian sealing business).

They reached the South Shetlands in November 1820, but found its seal population decimated. Palmer’s experience with the area, and the small size of the Hero, made him the ideal candidate to search for new rookeries. He sailed south from Deception Island on November 17 and sighted land at Orleans Channel, becoming the third person to sight the Antarctic continent.  The peninsula he charted is now known as Palmer Land.

Sealing was definitely profitable.  Nathaniel Palmer made enough out of his sealing ventures to invest on fast sailing ships, specializing in crack voyages to China, and becoming one of the designers of the brilliant craft that were known as clipper ships.

So, was it Palmer who carried a native woman to the South Shetland Islands, or another sealer like him?  Sealers in Australia did have the reputation of kidnapping Aboriginal woman and taking them to remote rookeries, to build huts and cook, and labor at stretching seal skins and scraping off the meat and fat.   However, it is more likely that she was taken by one of the early sealing captains as a guide and translator, and thus had a more respectable role, like Tupaia and Sacagawea.

Unfortunately, it is highly unlikely that the truth will ever be revealed.  Sealing logs and journals are very rare, as it was a very secretive trade.. Records were not kept -- because a rival captain might grab those records, meaning that the original discoverer would return to the rookery to find that every single seal had been killed. 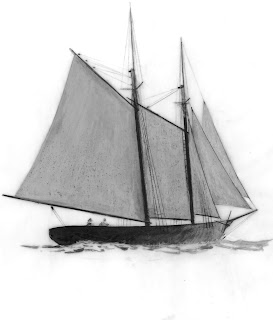 Posted by World of the Written Word at 2:59 PM
Email ThisBlogThis!Share to TwitterShare to FacebookShare to Pinterest

I like the research very much, but it seems to me the presence of this Native American woman's body on Livingston Island is the result of a crime. She was neither Chilean nor Argentine, as at the time that she died, Tierra del Fuego, like what is now southern Chile and the pampas of Argentina were inhabited by independent Native American nations, with no allegiance to any South American state of European origin. If she were Yamana (Yaghan), she was abducted from her village by seal hunters, probably raped multiple times, and then when she was of no more used to them, they killed her and threw her body overboard, which washed ashore on Livingston Island, where her scattered remains were discovered. I am sorry to throw such a negative light on this really interesting post, but pretending that this poor woman was somehow like Sacajawea does her a disservice, and one to her people as well, as they were cruelly exterminated by Europeans in the last quarter of the nineteenth century.

I agree she was most probably kidnapped and mistreated to death by a brutal crew.