Seeing the bottom of the world in New Zealand 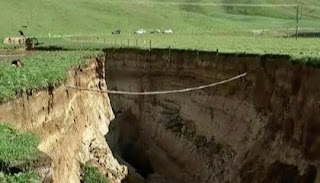 It reminds me of a time many years ago, when a fence was being erected about our house in Rotorua.  The hole for the corner post suddenly opened up to reveal a chasm.  From memory, it took a few truckloads of gravel to fill it up, so the fence could be completed.


A New Zealand farm worker was rounding up cows in the early morning last week when he stumbled upon a huge sinkhole that seems to have torn through the property overnight. According to Yasemin Saplakoglu of Live Science, the crater measures around 655 feet long and 65 feet deep; local experts are saying it is the biggest sinkhole they have ever seen.
The farm, located in the Rotorua district of New Zealand’s North Island, sits atop the crater of a long-dormant volcano. Brad Scott, a volcanologist with the research organization GNS Science, tells TVNZ that he was able to see “the original 60,000-year-old volcanic deposit[s]” at the bottom of the newly formed crater. Speaking to Radio New Zealand, Scott notes that he has never before encountered such a large sinkhole in New Zealand—and he believes the gaping chasm will continue to get bigger.
“This will erode back, the sides will continue collapsing and the hole will open over the next decade or so,” Scott explains.
According to New Zealand’s Earthquake Commission, “collapse holes” are quite common in the Rotorua region, which is filled with soft, pumice-based soils. Water seeping into the ground erodes the soil beneath the surface, creating cavities or tunnels. When a sub-surface cavity gets so big that it cannot support the land above it, the ground collapses into a sinkhole.
Scary, I suppose.  But Rotorua is still worth a visit .... to see geological wonders, as well as some interesting history.

Posted by World of the Written Word at 12:45 PM
Email ThisBlogThis!Share to TwitterShare to FacebookShare to Pinterest