It's all happening here . 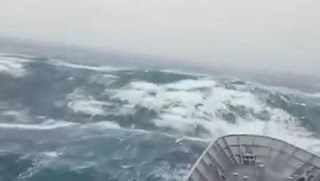 A monster wave has been recorded in the Southern Ocean that is probably not the biggest in the series, as the storm that spawned it had been raging for a while.

As I found out when researching the background to Island of the Lost, which is an account of two shipwrecks on Auckland Island in the sub-Antarctic in 1865, and the bleakly contrasting fates of the two sets of castaways, the Southern Ocean is notorious for its tempestuous seas.  The western cliffs of Auckland Island, which snared many a hapless ship breasting the stormy 'fifties latitude about the southern Pacific, were known to sailors as "the Jaws of Hell." 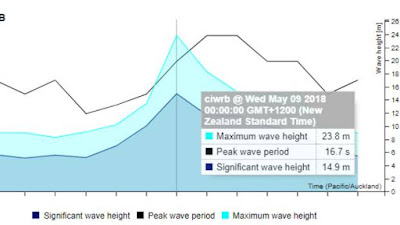 This week's measured wave (probably not the largest) was 28.3 meters.  The largest previously recorded was 22.03 meters, measured in 2012.

The buoy that recorded it was solar powered, and to conserve its battery, it made a 20-minute sample every three hours.

The lord alone knows what happened between samplings.

MetOcean, which makes the survey, is an operation wholly owned by MetService, the weather forecasting and recording institution in New Zealand.

Posted by World of the Written Word at 6:36 PM
Email ThisBlogThis!Share to TwitterShare to FacebookShare to Pinterest