Guns and the Wild West of Modern America 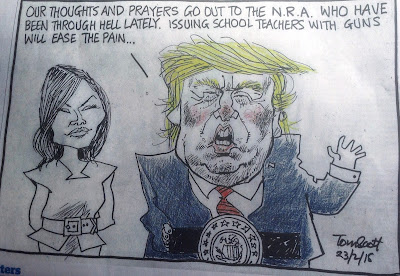 As if teachers did not have enough to do, training for the very exacting job of keeping students actively interested, as well as keeping up with the skills they are expected to impart...

As friend Maggie Rainey Smith commented on FaceBook, "Imagine if our professional development week mid-term, included how to handle a semi automatic firearm or hand gun...then imagine the funding issue - hmmm bullets or whiteboard markers ... and then of course, the parents will want all their kids to have a gun in their lunch box to keep things in perspective."

Has anyone over there thought of the obvious answer, that to buy a gun you have to have a gun licence, issued by the police -- which means you have a clean record, no history of violence or mental illness, are old enough to drink and vote and have a driving licence and a car with a licence of its own?

But let's get away from the controversy, and look at the Second Amendment, instead.  What does it actually mean?

It reads:  A well regulated Militia, being necessary to the security of a free State, the right of the people to keep and bear Arms, shall not be infringed.

There are two important words here -- important because they are the focus of the debate of who has the right to bear arms.

The first is MILITIA.  The impressment of citizens to form military groups -- small armies -- began in the 10th century in England, and was formalized after the Norman Conquest into an obligation to serve a term for some lord or other, who was supposed to arm and feed them.  They were incurably amateurish, however, something that was recognized in the English Civil War.  The Royalists, supporting the king, relied on these small, amateur armies, while the Parliamentarians developed a much more professional version, called the New Model Army, with the result that we all know.

And so the system survived after the Restoration of the King to the Crown,  with the royal household having what was in effect a small army of its own, though everyone was very careful to call the soldiers "guards."  (Hence the Royal Guards.)   Then, in colonial North America, the militia system evolved even further.  The settlers had hostile forces to contend with, but no professional soldiers, so formed their own squads of guards -- the village militia.   These amateur soldiers were remarkably successful -- in Bermuda there were interesting encounters with mutinying privateers, where the Bermudian Militiamen did very well indeed.  (In New Zealand, in the 1860s, similar village militia units were raised from the local populace to help fight the Land Wars.)

Back in England, in the 18th century, the militia system was evolving, as well.  The politicians, wary of a military force that was controlled by the throne, passed legislation outlawing the establishment of a standing army in times of peace -- with the codicil that any man who was a Protestant had the right to bear arms.  This meant that a local militia could be easily raised in an emergency -- for instance, to contest the tyrannical action of a king.

This system was easily transferred to colonial North America.  Colonial militia, manned by villagers, served a vital role in the French and Indian Wars,  And then they were taken over by the Revolutionaries, providing a valuable supplement to the regular force that was also formed -- the Continental Army.  And we know the result of that, too.

Interestingly -- and importantly -- the militiamen were expected to provide their own weapons.  The Militia Act of 1792 reads, in part:  "... each and every free able-bodied white male citizen of the respective States, resident therein, who is or shall be of age of eighteen years, and under the age of forty-five years (except as is herein after excepted) shall severally and respectively be enrolled in the militia, ... every citizen, so enrolled and notified, shall, within six months thereafter, provide himself with a good musket or firelock."

So there we have the explanation for the second important word in the Amendment -- PEOPLE.

To read it again:  A well regulated Militia, being necessary to the security of a free State, the right of the people to keep and bear Arms, shall not be infringed.

Every able-bodied white male citizen, according to this, had the right to carry a "good musket or firelock" so that if he was called up to join the local militia, he would be carrying his own weapon with him.

Today, there are more than 500 militia groups in the United States, most of them rightwing.  You can watch a PBS documentary about them HERE.

Naturally, they all claim the right to bear arms.  Naturally, too, those "arms" are not "a good musket or firelock."

Did the writers of the Second Amendment have assault rifles in mind?  Obviously not.  But still it comes down to semantics.
Posted by World of the Written Word at 3:17 PM
Email ThisBlogThis!Share to TwitterShare to FacebookShare to Pinterest