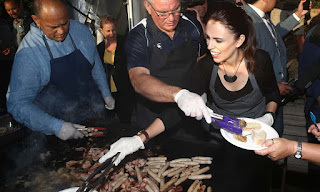 Waitangi Day, New Zealand national day, February 6, is usually the time for protest and acrimony, but this year was unusual.  As The Guardian meditates, our young female (and pregnant) prime minister has made a big difference.

What everyone has found rather fun is that instead of the usual formal breakfast for dignitaries to mark the occasion, Jacinda Ardern put on her rubber gloves, picked up tongs, and helped at the barbeque.  Nearly a thousand lined up to fill a paper plate.  Next year, Ardern joked, she and her ministers would stage the breakfast again, but "will cater properly for Ngapuhi appetites next time".

IN PRAISE OF THE HUMBLE BARBEQUE, it begins --

Donald Trump's sleep is restless.  He dreams of column after column of cold-steel phallus rolling along Pennsylvania Avenue.  Rows of gigantic missiles to put Putin in his place, thousands of gun-metal grey tanks to set Jong-un's nerves a-jangling...

We may not have the missiles, the marines, the military might, but there is much to be learned from a man or woman's management of the barbecue .

Our own leader, Jacinda Ardern, demonstrated such power on Waitangi Day when she grabbed the barbeque implements to distribute the sausages and gurther undermine of the pillars of male hegemony.

Here, in this country, we are proud of the fact, that many a successful political campaign began with a barbeque in a humble street.  And that select leaders have been treated to backyard barbeques too -- where, perhaps, policy was discussed over bangers and beer.

It's not a bad way to do politics.  And it doesn't cost nearly as much money.
Posted by World of the Written Word at 11:00 AM
Email ThisBlogThis!Share to TwitterShare to FacebookShare to Pinterest