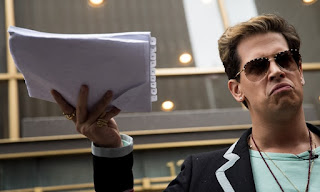 Milo Yiannopoulos is a purveyor of one-liner hatred, being a writer for Breitbart and a stirrer-up of restive crowds, but managed to become popular enough for publisher Simon & Schuster to sign a contract for his memoir, called Dangerous.

The manuscript proved unpublishable.  In February, S&S cancelled the contract, and the resultant court case has been going on ever since.

The latest development is an intriguing one.  Simon & Schuster has released a copy of his original manuscript, complete with blunt comments from his editor.  These include criticism of the book's "scattershot thinking," his paragraphs of "fake news" and his off-color jokes about Lesbians and fatties.

You can read some examples here, courtesy of the Washington Post.  To sum up, editor Mitchell Ivers (a vastly experienced editor in this field) said that he and his colleagues were "disappointed" with the work, which turned out to be a mere reworking of his incendiary speeches.

Yiannopoulos alleges that Simon & Schuster cancelled his book because of his comments about underage sex.
Posted by World of the Written Word at 9:27 AM
Email ThisBlogThis!Share to TwitterShare to FacebookShare to Pinterest